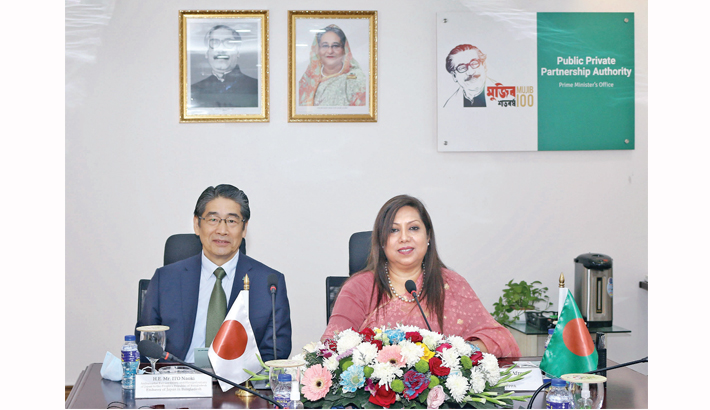 Ambassador ITO Naoki came up with the remark while paying a courtesy visit to Secretary and CEO of Public Private Partnership Authority (PPPA) Sultana Afroz.

If implemented, the investment will be about 30 percent of portfolio of the PPPA pipeline.

“Kajima Corporation is very enthusiastic about undertaking the Multimodal Transport Hub at Kamlapur while Mitsubishi Corporation is keen to invest in concession, operation and maintenance of the Airport terminals in Dhaka,” said ITO Naoki.

He added that the Japanese Embassy in Dhaka was interested to work more closely with the PPPA.

"PPP has been high in my agenda," the ambassador said. He commended the team spirit and motivation for work at the PPPA.

The ambassador expressed strong commitment of Japan in promotion and development of PPP projects in Bangladesh. "I am here to strengthen the cooperation between PPPA and Japan," he said.

ITO Naoki also lauded PPPA’s initiative to include interns and consultants outside the regular system as well as maintaining near gender parity in the office, thereby making it the most promising organization in the  government structure in Bangladesh. Second Secretary at the Embassy of Japan in Dhaka Takashi Shirai accompanied the ambassador during the visit.

Sultan Afroz and ITO Naoki discussed about the upcoming Fourth Bangladesh-Japan Joint PPP Platform Meeting which will be held on 24 February at virtual platform.

It is expected that PPP projects with Japan through Government to Government (G2G) partnership modality will help the massive financial investment plan of Bangladesh government.

Earlier, in 2017, Prime Minister Sheikh Hasina in her first Board of Governors meeting of the PPPA as Chairperson approved the “Policy for Implementing PPP Projects through Government-to-Government (G2G) Partnership”.