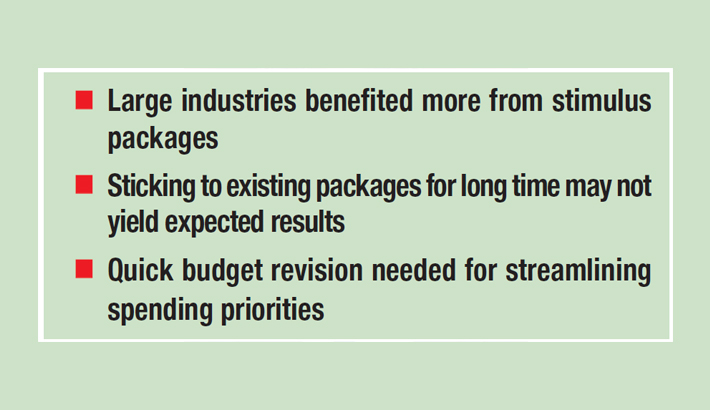 The economy is most likely to need a second bailout for sustainable recovery and that should focus on SMEs and employment, Centre for Policy Dialogue (CPD) observed on Monday.

In its half-yearly economic analysis for ongoing FY21, the independent think tank found “asymmetry” in terms of access to and implementation of the first stimulus packages.

It said large industries were more successful in accessing and attaining the benefits of the packages compared to their smaller counterparts.

“Continuation of the same packages for extended time will not produce the intended results and outcomes,” he added.

CPD said SMEs are important sources of employment and the slow recovery of these small and medium businesses may lead to further rise in inequality.

"This could jeopardise the sustainability of the recovery," he said, adding, "Policymakers need to chart out the recovery path in a manner that does not leave out the weaker but critically important sectors of the economy."

Weak and poorly governed commercial banks should not be allowed to provide COVID-19 related support packages; rather MFIs should be more actively engaged in the next stimulus packages in order to reach the grass-root levels and the marginalised population groups, the think tank suggests.

It also called for early revision to FY21 budget for mid-course correction, saying that weak budgetary programming has resulted in a budget surplus even in the backdrop of the pandemic during the early months of FY21.

Also, the budget for FY22 should come up with a medium-term strategy to phase out tax exemptions and subsidised credit schemes, according to CPDs suggestions.

Public expenditure priorities needs to be revisited and adjusted, it said, adding that more public money should be injected for rural infrastructure and employment related social protection programmes, it also suggested.

CPD said the economy remained resilient because of its domestic strength resulting from high agricultural production, remittances and exports, especially in RMG sector.

However, it warned against the possibility of a K-shaped recovery globally-- when a segment of the economy pulls out of a recession while others remain stagnant.

Stimulus packages and liquidity support will help large industries and public organisations recover at a faster pace while the small and medium enterprises (SMEs) may lag behind, it explained.

Global recovery is likely to be slow, uneven and uncertain, while recovery in the domestic demand has shown much stronger resilience, according to CPD researcher Khan.

"It will take more time for the global economy to recover. The immediate focus should be on the domestic economy where stimulating domestic demand should get priority," he said.