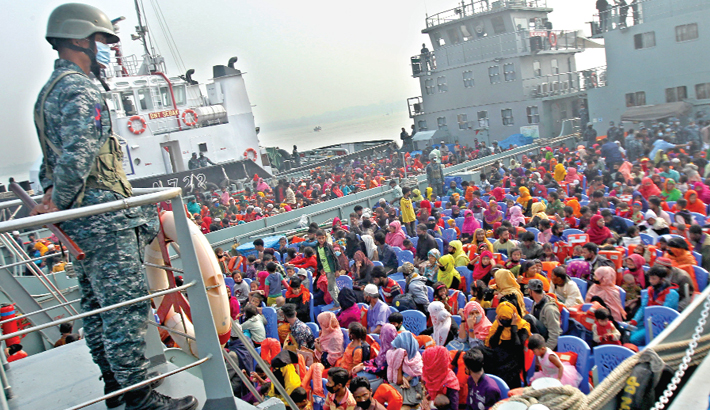 The fourth batch of Rohingyas boards Bangladesh Navy ships in Chattogram Boat Club area on Monday while they are being taken to Bhasan Char island of Noakhali. —Rabin chowdhury

CHATTOGRAM: As many as of 2,010 Rohingyas reached Bhasan Char in Hatiya upazila of Noakhali from camps in Cox’s Bazar on Monday as part of relocating 3,500 forcibly displaced Myanmar nationals to the island in the fourth phase.

The Rohingyas left the Patenga Naval jetty here in five ships of Bangladesh Navy around 10am in a festive mood and landed in the island around 1:30pm, Additional Refugee Relief and Repatriation Commissioner Mohammad Shamsud Douza told the Daily Sun.

Before going to Bhasan Char, they were brought to a temporary transit camp at Ukhiya Degree College playground in Cox’s Bazar on Sunday and later taken to Chattogram.

They stayed at BAF Shaheen College in port city overnight on completion of the registration process.

Around 1,500 more Rohingyas will be taken to the island today as part of the fourth-phase relocation process,

Earlier, a total of 6,688 Rohingyas were relocated to Bhasan Char in three phases since December 4 last.

The second batch of Rohingyas reached the island on December 29 last while the third batch was relocated on January 29 and 30 this year.

Most of the Rohingya people expressed their happiness while heading towards Bhasan Char with their family members and necessary household items under the supervision of Bangladesh Navy.

Asma Khatun, a middle-aged Rohingya woman, said she was excited to be relocated to the island as there will be a better environment than Ukhiya camps. “I was afraid of violence, drug trading and other criminal activities in Ukhiya camps which seemed to be insecure for women and children,” she observed.

She was convinced to move to Bhasan Char after knowing about better living of her relatives who went there in the second phase, she said.

Children will have a better environment for study and play there which means a lot for them, Asma added.

Septuagenarian Abdul Mannan said he was moving with all of his family members expecting better facilities. “We’ll encourage our relatives who are still living in Ukhiya camps to come to Bhasan Char if the authorities provide us a better living place,” he said.

He, however, expressed his willingness to go back to his place of origin in Myanmar after all.

Jamil Ahmad, 40, said he has been living in Bangladesh since his childhood and never had a better place to live properly. “It’s a great opportunity for me and three members of my family to be settled in a better place with food, security and other facilities.”

Jamil wants to run a small business in Bhasan Char to improve his lifestyle.

Bangladesh is currently hosting over 1.1 million Rohingyas and most of them took shelter in Cox’s Bazar in the face of ethnic cleansing and genocide by Myanmar security forces from August 25, 2017.

In addition to modern accommodation for the Rohingyas, educational institutions, hospitals, clinics and playgrounds have already been set up at Bhasan Char.

Navy implemented the Tk 31-billion housing project, funded with public money, after the government planned to relocate a portion of them to the island.

There are 1,440 cluster houses and 120 four-storey shelter houses to accommodate more than 1 lakh people.