High-tech vessels to be added to Coast Guard

Says Kamal at 26th founding anniv of the force 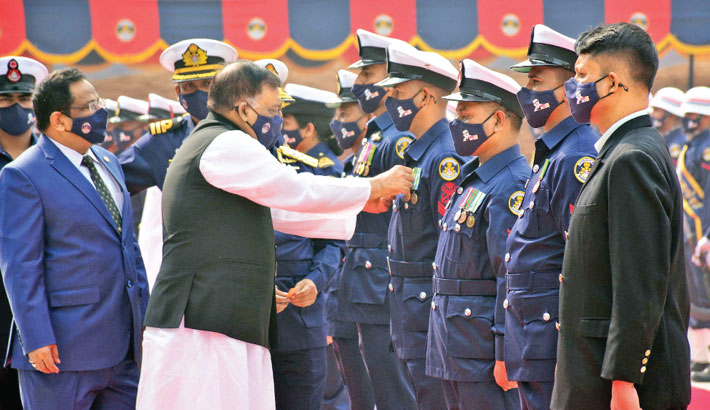 Home Minister Asaduzzaman Khan hands over special medals to Bangladesh Coast Guard members at its headquarters in the capital’s Agargaon area on Sunday, marking the 26th founding anniversary of the force. SUN photo

Home Minister Asaduzzaman Khan Kamal has announced plans to turn the Bangladesh Coast Guard into a modern independent force by recruiting its own manpower.

The Coast Guard will soon have modern offshore patrol vessels (OPVs), hovercraft and other high-tech vessels, he said.

The home minister told reporters at a ceremony marking the 26th founding anniversary of the force at Coast Guard headquarters in the capital’s Agargaon on Sunday. He was present as the chief guest.

Director General of the Bangladesh Coast Guard Rear Admiral M Ashraful Haque said that the modernization and capacity building of the force continues due to the patronage of the Prime Minister and the appropriate and timely direction of the home ministry. Mostafa Kamal Uddin, Senior Secretary to security service division of the home ministry and other military and civil officers were present on the occasion.