Show love to your city 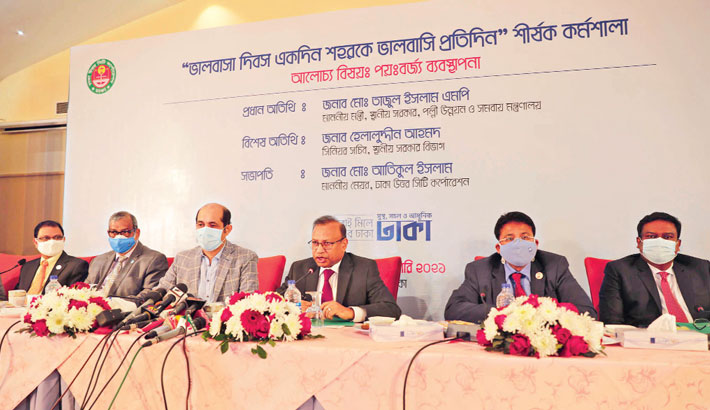 LGRD Minister Md Tazul Islam speaks at a discussion on sewage management at a city hotel on Sunday. DNCC Mayor Atiqul Islam presided over the event.

He made the request at a programme on sewage management organised by Dhaka North City Corporation (DNCC) at a city hotel in the capital.

The minster said, “A larger portion of the sewage produced in the capital is dumped into water bodies like canals and lakes. It must be stopped.”

He underscored the need for forming a committee in this regard.

“We have to love not only people but also the city. Dwelling place and its surroundings have to be kept neat and clean. We have to grow a sense of love for the city by cleaning waste around us.”

Tazul also said that the cities of developed countries have a decent look because of a sense of responsibility of their residents.

“The government has been implementing a project to treat all sewage produced in the capital through five plants. The construction work of Dasherkandi sewage treatment plant is close to end.”

The minister said city authorities are persuading the government to entrust them with looking after all lakes in the capital.

Speaking on the occasion, DNCC Mayor Atiqul Islam said there must be septic tanks in city buildings for proper sewage disposal.

“It is essential to ensure septic tanks in city buildings. They (city dwellers) can consult with engineers in this regard.”

Mayor Atiqul said that DNCC released fish in Hatirjheel, Baridhara, Gulshan, Banani and Uttara lakes which died due to a dearth of oxygen.