Migratory Birds: Indicators of state of the environment 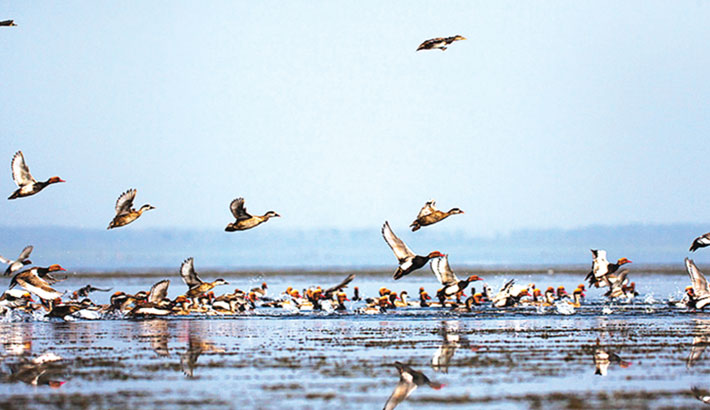 The migratory birds travel from one place to another at regular intervals often over long distances. World Migratory Bird Day was started in 2006 by the Secretariat of the African-Eurasian Migratory WaterBird Agreement (AEWA) in collaboration with the United Nations Environment Program Convention on Migratory Species (UNEP-CMS) as a way to raise awareness about migratory birds.

In 2020, the theme of World Migratory Bird Day was “Birds Connect Our World” and has chosen to highlight the importance of conserving and restoring the ecological connectivity and integrity of ecosystems that support the natural cycles that are essential for the survival and well-being of migratory birds. The theme also underlines the fact that migratory birds are part of our shared natural heritage. They depend on a network of sites along their migration routes for breeding, feeding, resting and wintering.

Birds migrate when the food and nesting sources in their habitat are exhausted, which is usually due to seasonal changes. Though it’s not completely known for sure, ornithologists believe migration is triggered by a combination of changes in the length of the day, temperatures falling, depletion of food supplies, and genetic predisposition.

Different species of birds migrate different distances ranging from just a couple of miles down the road, to across continents. Here is a breakdown of four basic migration types and where a few of my favourite feathered friends (these will vary slightly from region to region) fit into the formation.

Some major categories of migration are:

Seasonal: Migration periods are starting during spring and fall, though in some areas the change between wet and dry seasons. This well-known and widespread migration is predictable based on seasonal changes, as birds move between breeding and non-breeding ranges.

Latitudinal: Usually means the movement from north to south. This is the most common migration type with many birds that migrate from the Arctic to the tropics. The exact direction of migration is often determined by geographic features, such as mountain ranges, coastlines, and available habitats.

Longitudinal: Similar to latitudinal migration, this kind of movement is a change between different longitudes from east to west or west to east. This is the most habitual type of migration for many birds in Europe, where geographic features encourage birds to move longitudinally rather than latitudinal.

Altitudinal: This type of migration is a move to lower elevations in winter, when harsh weather and deep snowfall may make staying at upper elevations impossible. Birds that use altitudinal migration may not venture far in terms of overall mileage or distance, but just a few hundred feet of elevation can make a substantial difference in habitats and available resources.

There are many challenges and threats to bird migration. There are combinations of causes which need addressing to turn the trend of demise of migratory birds. Such as:

Habitat loss: Deforestation, the draining of wetlands, planting of non-native trees, the loss of areas to urban developments and intensive agriculture are major threats to birds. Numbers of many species are in decline, as a result of habitat loss and these losses are particularly on islands, where bird populations are often small and very fragile.

Unsustainable harvest: Unsustainable harvest and poorly enforced laws lead to the killing of millions of birds around the world. Especially across the tropics, commercial harvest for trade is decimating many bird populations and maybe one of the gravest threats presently facing birds in rainforests.

Climate change: As temperatures rise, birds are thrown from their migration cycle; when birds reach their destinations, they rely on certain foods to live through the season. Breeding success in some species, such as insect-eating songbirds, could be jeopardised due to mismatch between the peak of availability of food and hatching of chicks. Climate change leads to changes and shifts in habitats, which causes redistribution of birds.

Plastic pollution: Sea birds are mistaking plastic pellets for fish eggs, small crabs and other prey, sometimes even feeding the deadly pellets to their young. Even though only 0.05 per cent of plastic pieces of surface waters are pellets, they comprise about 70 per cent of the plastic eaten by sea birds. These small plastic particles have been found in the stomachs of 63 of the planet's 250 species of sea birds.

Oil spills: Oil spills constitute a major threat to birds too, particularly for those that spend a lot of time on the surface of the water such as loons and waterfowl. But also other migratory birds are at risk; having just started their annual migration. Many birds pass through contaminated sites which are important staging areas for them.

Invasive alien species: Alien invasive species have damaged bird populations in some parts of the world, particularly those that occupy islands. A rise in global trade and travel over the past century has led to an acceleration in the introduction of exotic species. Exotic species - including snakes, rats, cats, plants, and insects - now menace a quarter of globally threatened bird species.

Bird migration is interlinked with the history of civilisation. Migration is also a predominant ecological phenomenon because birds provide a lot of ecosystem services to humanity. This is something we should celebrate and preserve. However, migration is a perilous journey and involves a wide range of threats. Besides, only a small number of birds are threatened by natural events. According to the wildlife conservation and security act, killing and hunting of migratory birds is a punishable offence.

Human activities are the major source for most dangers migrating birds are exposed to. And as diverse as people and their habits in different countries are, so are threats which the birds face. The loss of habitats due to pollution or exploitation caused by encroachment for settlement, agriculture, grazing etc. are the main threats migrating bird’s face. As they are dependent on finding suitable breeding and wintering grounds as well as stopover sites along their flyways where they can rest and feed. The loss of any of these sites used by birds during their annual cycle could have a dramatic impact on the bird’s chances of survival.

World Migratory Bird Day has a global outreach and is an effective tool for the international community to help raise awareness on the threats faced by migratory birds, their ecological importance and the need for international cooperation to conserve them.