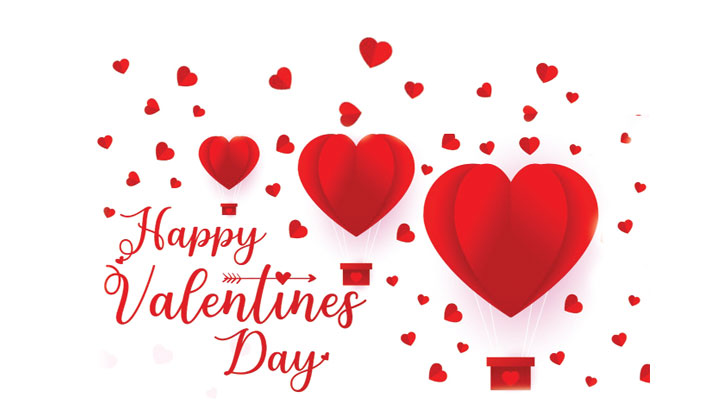 February 14 is celebrated as Valentine's Day throughout the world. People in Bangladesh have adopted the Western traditions of celebrating Valentine’s Day by exchanging gifts like flowers, chocolates, etc. or a romantic dinner date. Thomas Merton aptly said, “Love is our true destiny. We do not find the meaning of life by ourselves alone - we find it with another”.

On this day, the world celebrates the memory of St Valentine. This year may have less colourful celebrations because of COVID-19. To catch the attention of the youth, more and more brands target the Valentine opportunity every year and the air has filled with promotional programmes targeted at men and women to savour their indulgences at modestly safe levels.

Married people have also begun to join the Valentine train too. Many men go home with presents for their wife. Some get back home and join the wife in condemning those who spend time, energy and money on St Valentine’s Day.

Valentine’s Day is in memory of a Priest who went against the decision of the Roman Empire to outlaw marriages among soldiers. Emperor Claudius II, who was fighting many wars, wanted a strong army, but a lot of his men did not want to be soldiers. The Emperor assumed that men refused to join his war efforts because they wanted to stay home with their wives and children. So he decided to outlaw the marriage of soldiers! He reasoned that if men were stopped from getting married, there would be no family or children to distract them from the all-important duty of fighting for the state.

But this Priest felt it was important that men get married. He thought this saved them from the temptation of living with women without being legally married, a sinful act by his faith. So, he decided to do what he thought was right. He would gather people who were interested in getting married in a secret place, far away from prying soldiers and join them in holy matrimony. He was soon caught in the act! When Roman soldiers discovered his activities, he was arrested and brought before Emperor Claudius.

The priest made a good impression on the Emperor who thought he was a well-spoken and wise young man. Rather than harm the priest, the Emperor wanted him to rethink. He wanted him to stop being a Christian and become a loyal Roman citizen, who would conform to the laws of the land. But the priest swore that he would never deny his faith. He even dared to try to convert the Emperor! The audacity infuriated Claudius and he ordered that the priest be sent to prison until he could be executed.

Some claim that while in prison, the priest performed a miracle by healing the blind daughter of his jailer, Asterius. The jailer’s daughter and his 44-member household were said to have been converted and baptised into Christianity. Before his execution, the priest had written letters to his close friends coveting their prayers, signing those letters “Remember your Valentine.” He was executed on the 14 or the 24 of February in the year 269 A.D or 270 A.D. Some two centuries later, around 498 A.D, Pope Gelasius declared February 14 as a church sanctioned holiday in honour of the man who was martyred for the protection of the sanctity of holy matrimony.

Spare a thought for others, find time to pray that we may continue to understand the importance of a happy and peaceful family for the overall welfare of society and the world. That is the real spirit of lovers’ day which our world gravely needs. Love connects us; gives us hope; humbles us; makes us whole. Helen Keller said, “The best and most beautiful things in the world cannot be seen or even touched. They must be felt with the heart.”