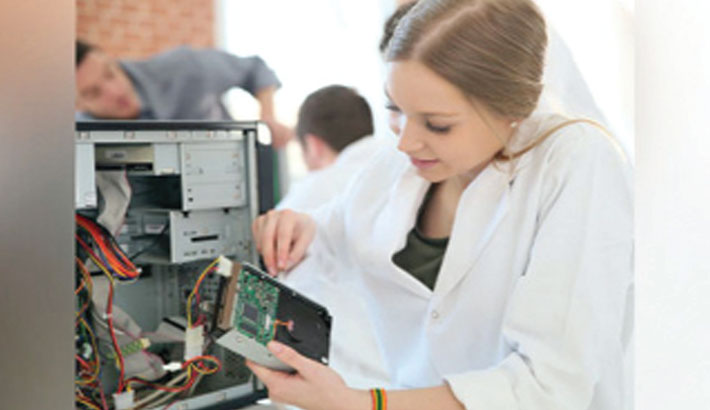 Despite a shortage of skills in most fields of the current technology revolution, women account for only 28 percent of engineering graduates and 40 percent of graduates in computer science and informatics, according to advance excerpts from the organisation’s Science Report to be fully published in April.

UNESCO is the United Nations’ educational, scientific and cultural organisation.

The track record for members of the Organization for Economic Co-operation and Development (OECD) — which groups mostly rich countries—came in lower than the global average in terms of the share of women among engineering graduates, the report found.

UNESCO found no distinct regional pattern, but noted that some of the highest proportions of female engineering graduates were found in Arab states, with Algeria at 48.5 percent, Morocco at 42.2, Oman at 43.2, Syria at 43.9 and Tunisia at 44.2 percent.

Latin America also did well, with female engineering graduates representing 41.7 percent in Cuba, 47.5 in Peru and 45.9 in Uruguay.

“Overall, female researchers tend to have shorter, less well-paid careers,” said UNESCO, which said it had published the excerpts to coincide with the International Day of Women and Girls in Science, held at the United Nations on Thursday.

“Their work is underrepresented in high-profile journals and they are often passed over for promotion,” it said, adding that women were also typically given smaller research grants than their male colleagues.

“Even today, in the 21st century, women and girls are being sidelined in science-related fields due to their gender,” UNESCO Director-General Audrey Azoulay said in the statement.

UNESCO said that women needed to be fully represented in the digital economy to prevent the current drive towards increased automation—dubbed Industry 4.0 — from perpetuating traditional gender biases.

“As the impact of artificial intelligence on societal priorities continues to grow, the underrepresentation of women’s contribution to research and development means that their needs and perspectives are likely to be overlooked in the design of products that impact our daily lives, such as smartphone applications,” it said.