Sunflower cultivation gets popular in Netrakona 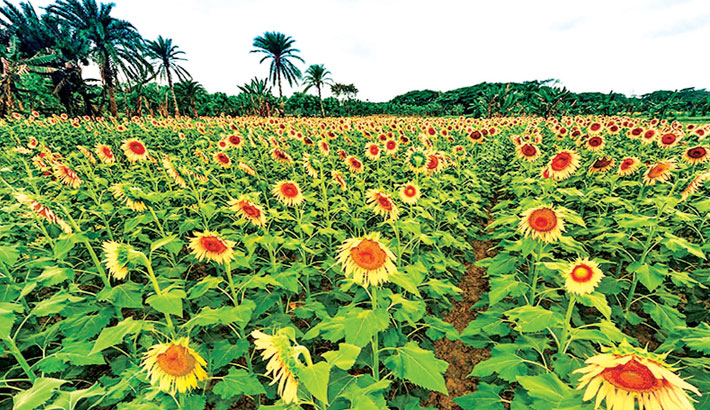 NETRAKONA: Farmers in the district have started cultivating sunflower, finding it to be a profitable crop.

Farmers have been showing their keen interest to cultivate Sunflower in their fellow lands as they can earn more profits.

There is high demand for sunflower also because the oil derived from its seeds is good for health as it contains no cholesterol.

Sources in the Department of Agricultural Extension (DAE) in Netrakona said farmers sowed sunflower seeds from mid-November. In March-April, sunflower plants start sprouting new seeds, like those of mustard, which are later processed into edible oil.

Department of Agriculture Extension (DAE) Netrakona office sources here said, a total of 54 hectors of land have already been brought under Sunflower cultivation in the district this year.

Deputy Director of DAE Netrakona Mohammad Habibur Rahman told the correspondent, the DAE distributed 1,600 kilograms of improved quality seeds of Sunflower as incentives among 1,600 small and marginal farmers of the district.

The crops specialists and field-workers of DAE continued rendering their field-level service to let the cultivators know about the modern cultivation methods to cultivate Sunflower crops through using latest technologies by reducing production costs.

Harvesting of Sunflower oil seeds will be started in the middle of March. The deputy director also said if the weather condition remains favorable, over 130 tonnes of seeds are expected to be produced in the district this year.

"It requires very little irrigation and small amounts of fertiliser and insecticides. A kg of sunflower seeds yields 550 to 600 grams of oil, which is more than that of any other oil seeds," Deputy Director of DAE Netrakona added.

He said DAE and some non-governmental organisations are supplying seeds, necessary fertilisers and pesticides, and giving technical assistance to the farmers.

Kamal Uddin, a farmer of Netrakona Sadar upazila, said this year he cultivated High Sun-33 variety sunflower on four bighas of land. Last year, he earned Tk15,000 from sunflower cultivation on one bigha of land after recovering the production cost.