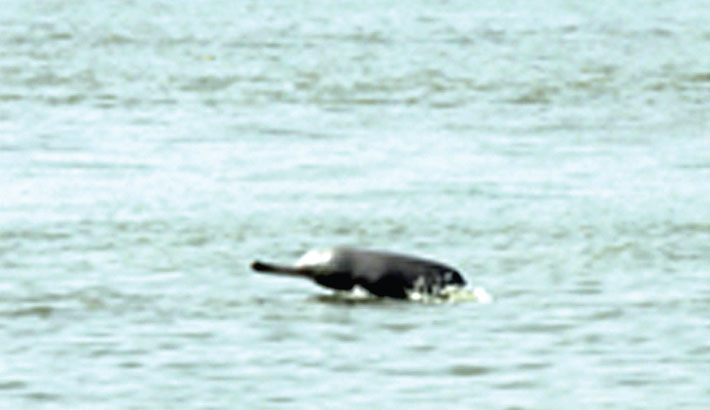 A dolphin spotted gamboling in the river Karnaphuli. Nowadays, barely a few dolphins are visible in the river following a ‘catastrophic collapse’ in their numbers. The snap was taken from Bangla Bazar area in Chattogram on Friday. —Rabin Chowdhury

CHATTOGRAM: Though jumping out of dolphins in the river Karnaphuli was a very common sight, the number of the aquatic animal is decreasing gradually due to both natural and man-made causes.

Experts attributed to pollutants from the multi-dimensional sources, absence of sewage treatment plant in the city of seven million people, dumping of household solid and liquid wastages, spillage of oil from water transports, siltation, overfishing and lack of sufficient space for free movement and breeding of dolphins area the main reasons behind dwindling of the highly-social animal.

They called upon the authorities concerned, including the Chattogram Port Authority (CPA) and Bangladesh Coast Guard, to take steps for ensuring a congenial environment having suitable spaces for movement and breeding of the dolphins.

SM Peyar Ali, 53, a boatman who has grown up on the bank of the river Karnaphuli, said roaming of dolphins in groups and jumping out of the river water were a common scene earlier.

‘But we hardly see the dolphins in the river now,’ said Peyar, also the president of Karnaphuli Nodi Sampan Majhi Kallyan Federation.

He also said pollution and increasing number of the mechanised boats and vessels in the river are the main reasons behind the decline in the numbers of dolphins, locally known as ‘Shushuk.’

Sources said liquid and solid wastes from the residences and chemical wastes from the industrial units find their ways to the river through over 50 canals of the city every day.

Karnaphuli Paper Mill (KPM), the country’s largest and state-owned paper manufacturer, is one of the main contributors of the pollutants in the river since its inception in 1953.

The excessive movements of water transports through the river and haphazard anchoring of them are also disrupting the habitat of the dolphins.

Prof Dr Md Shafiqul Islam of Institute of Marine Science and Fisheries at Chittagong University said both natural and man-made reasons are responsible for the decreasing number of the aquatic animal.

“The important conditions for dolphin distribution are fresh and pollution-free water. But, the river water is being contaminated with liquid and solid wastes from residences and industries regularly,” he said.

“In a survey carried out in the river earlier, we observed that large scale aggregation of dolphins in the Shikalbaha Khal, downstream of Shah Amanat Bridge pilings and the opposite of the Chattogram Boat Club,” said the researcher.

He informed that dolphins occasionally move towards the mouth of different canals connected with the river during the high-tide.

“Accidental collision with propellers of boats and vessels and use of fry catching net also hamper free movement of the dolphins,” he said.

The university professor laid emphasis on the need for sound conservation management strategies for the dolphins.

Shafiqul suggested that the Chattogram Port Authority can own the dolphins for proper conservation of the species and their habitat.

“The ownership of this species and their care by the CPA may lead an example to the world and help to withstand their initiative to be a green port,” he added.