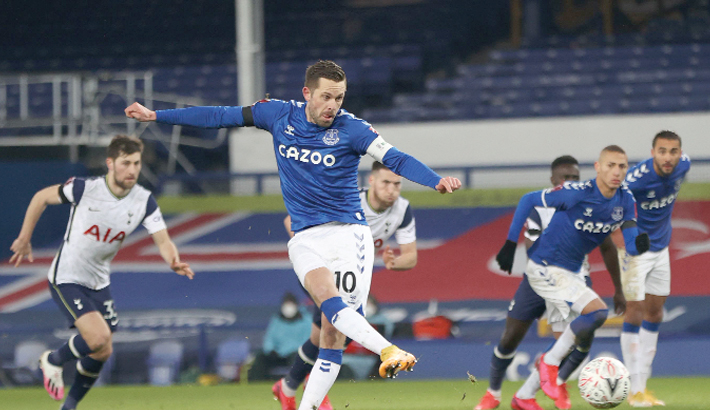 Everton upped the pressure on Jose Mourinho with a thrilling 5-4 victory over Tottenham after extra-time to reach the FA Cup quarter-finals, as Manchester City eased into the last eight by beating Swansea on Wednesday.

Tottenham face a daunting trip to City in the Premier League on Saturday and defeat after a draining 120 minutes was the last thing Mourinho wanted.

Spurs have lost four of their last five games and one of three chances to end the club's 13-year wait to win a trophy in cup competitions is now gone.

Mourinho's men made a bright start at Goodison Park as Davinson Sanchez headed them into the lead after just three minutes.

However, the defensive errors that have cost Tottenham dear in recent months were in evidence as Everton struck three times in seven minutes just before half-time through Dominic Calvert-Lewin, Richarlison and Gylfi Sigurdsson's penalty.

Erik Lamela reduced Spurs' deficit in first-half stoppage time before another rare goal for Sanchez made it 3-3.

Richarlison then smashed home from a narrow angle to restore Everton's lead.

Bernard's brilliant finish from Sigurdsson's scooped pass proved a fitting winner to a pulsating tie to keep alive the Toffees' chances of a first trophy since 1995.

Kyle Walker, Raheem Sterling and Gabriel Jesus were on target for City, who extended their winning run in all competitions to 15 games with a 3-1 success over Swansea.