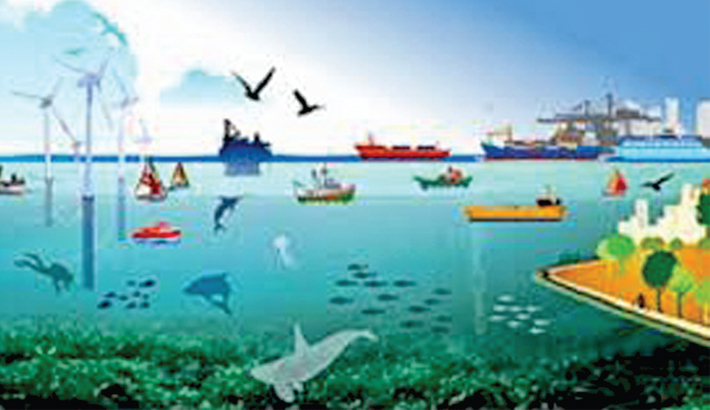 Sea and oceans teem with diversified resources which are being used globally to improve the quality of life of human beings. Sustainable economic activities pivoted around all forms of marine resources are termed as blue economy. With the settlement of maritime disputes with Myanmar in 2012 and India in 2014 under the leadership of Prime Minister Sheikh Hasina, Bangladesh has established exclusive rights on extended area of the Bay of Bengal. This victory has opened a golden opportunity of utilizing marine resources for sustainable economic development. Planning Commissions and other ministries and departments concerned are developing short-term, mid-term and long-term plans while protecting the environment and biodiversity of this vast ocean. Blue economic activities will certainly make the momentum of our accelerated and inclusive development process. Development activities in the coastal areas, particularly Cox's Bazar, Kutubdia, Maheshkhali, Patuakhali, Bagerhat, Khulna, Mongla etc. are going on to develop infrastructure and other facilities to pave the way for huge private investment in blue economy.

The settlement of disputes with Myanmar in the International Tribunal for the Law of the Sea (ITLOS) and India in United Nations Tribunal (Permanent Court of Arbitration-PCA) regarding maritime boundary is a great achievement for the government. The verdicts of these two international courts have extended the maritime boundary of Bangladesh to 118 thousand 813 square kilometres of the Bay of Bengal. Now, Bangladesh has occupied exclusive economic zone of 200 nautical miles and resources on seabed in 354 nautical miles. Bangladesh has the sovereignty for utilizing and exploring natural resources like oil and gas in the exclusive economic zone. It is mention worthy that the Father of the Nation Bangabandhu Sheikh Mujibur Rahman took the first initiative for settlement of maritime disputes with neighbouring countries India and Myanmar and initiated corresponding with these countries in 18 April 1974. The present maritime boundary with newly occupied sea area in the Bay of Bengal has created an ample opportunity to increase the contribution of blue economy to the GDP of Bangladesh.

According to thecommonwealth.org the annual volume of worldwide ocean economy is 1.5 trillion USD whereas 80 per cent of global trade volume is carried through seaways. It is estimated that around 34 per cent of crude oil will be produced from offshore mines by 2025.  Blue economy contributes significantly to Australia, China, the USA, the European Union, Ireland, Mauritius, etc. Australia is expecting to increase the contribution of the blue-economy to its GDP to 100 million dollars by 2025. After winning a huge sea area in the Bay of Bengal the government is now working to use this vast resource for the economic development of Bangladesh.

In Bangladesh, a country with a large population, marine resources can play an important role in meeting the food needs of the growing population. It will contribute to conserving the environment by reducing the pressure on land. Studies have shown that different types of antibiotics, anti-cancer and anti-inflammatory drugs are being developed from marine plants and animals.

Concerned ministries and departments of the Government are working jointly to maximize the economic benefits from marine resources in the Bay of Bengal. Formulation of a strong policy framework is underway to harness the potential of the blue economy. A taskforce consisting of local and international experts will develop the policy framework, titled 'Policy Framework for Marine and Coastal Development'. The policy will address the exploration and development of marine resources, proper use of marine and coastal space, the provision of goods and services assistance against maritime activity, and the protection of the marine environment. The transformation of the blue economy will require structures for policy support, controls, rules, management, and administrative activities. Simultaneously different maritime economic opportunities will be identified.