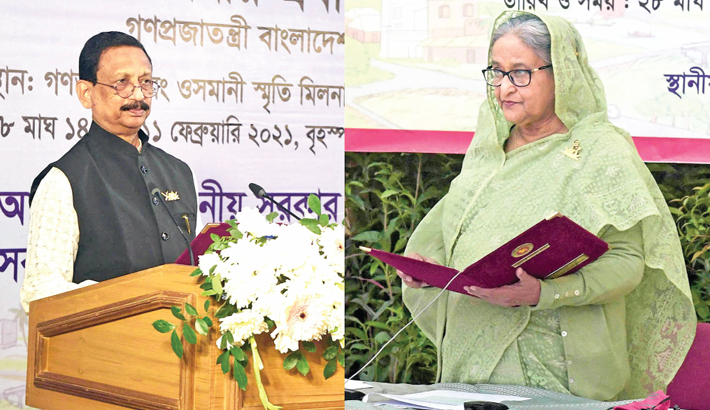 Prime Minister Sheikh Hasina on Thursday called upon the elected public representatives to work for the welfare of the country and its people.

“As the public representatives, your aim should be to work for the welfare of people and change their fate,” she said while addressing the oath-taking ceremony of the newly elected Mayor and Councillors of Chattogram City Corporation at the Osmani Memorial Auditorium, reports UNB.

She joined the event from her official residence Ganobhaban through a videoconference.

Sheikh Hasina said the public representatives should to go to people to know what they actually want and work for their welfare.

She said election is not just a one-time affair. A political leader can be elected repeatedly if one can gain the trust and confidence of people. “You’ve to work keeping your election pledges and oath in mind.”

As a result, she said, the entire scenario of Chattogram City Corporation has now changed to a great extent compared to that of pre-2009 period.

Besides, the Prime Minister said, more development programmes are being implemented in the Chattogram City Corporation area.

The Prime Minister asked the newly-elected public representatives to take care of the ongoing development programmes so that these are completed properly and timely.

“Make sure the development projects are completed quickly and there must not be any deficit and lacking in their implementation.”

Sheikh Hasina, however, regretted that the corona pandemic caused huge losses to people and the economy of the entire world making it stagnant.

She asked the public representatives to mobilise and encourage the people so that all could take coronavirus vaccine.

Hasina also mentioned that the government has declared stimulus packages for all sectors—from industry to agriculture—for keeping the wheels of the economy moving.

The Prime Minister also said the Awami League has been working tirelessly to ensure a better life to the people of the country and asked the public representatives to work hard so that the fruits of the country’s independence can be taken to every house of the country.

Recalling the contribution of the leaders of Chattogram, the Prime Minister said they all had been with the Father of the Nation Bangabandhu during all struggles, including the Great War of Liberation.