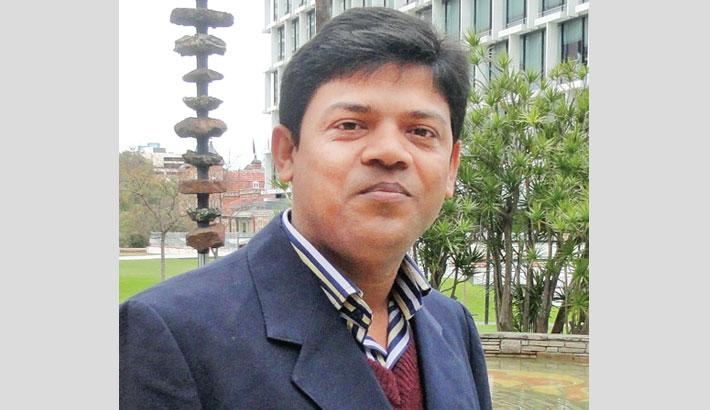 Among different agro-ecological zones of Bangladesh, the coastal region is the most fragile and least productive because of soil and water salinity, water logging, storm surges, cyclones, etc. This area comprises 32 % of the net cultivable land of Bangladesh, but almost 1.1 Mha of that cultivable land is compromised by different levels of soil salinity. Topographically, the coastal area has an elevation 2-3 metres above the sea level and is connected with many rivers and canals; thus, tidal flooding through these rivers and creeks inundates the vast agricultural land and increases salinity in the soil, particularly during the dry season. Agriculture, therefore, in the coastal zone of Bangladesh is threatened by a range of abiotic stresses, including soil and water salinity, water logging, and drought due to crop water unavailability for high salinity in the soil. In addition, in this area, the predominant clay minerals of soil are smectite and mica, and drying of these soils creates shrinkage and vertical cracking, which limits dry-season non-rice cultivation. Rice is generally grown in this region in the wet (Kharif) season, but the land remains fallow in the dry (rabi) season. Recent studies have shown that there is 700,000-800,000 ha of land underutilized during the dry season in Southern Bangladesh. The government has now given more emphasis on exploiting every possible opportunity in this salt-affected low-lying area to maintain increasing food demand and to have food self-sufficiency for the growing population.

There is a great potentiality to increase the cropping system in this region if crops can be established in a timely manner to allow for the better use of residual soil water after the monsoon season, together with a couple of supplementary irrigation. Achieving this requires the cultivation of short duration high yielding Aman rice varieties that mature early, and drainage of excess water shortly prior to Aman rice harvest. Zero/No-tillage and reduced tillage technologies could be applied to enable the early establishment of rabi crops (i.e., dry season crops) into the moist soil as soon as possible after the Aman rice harvest. Moreover, the use of straw mulch could help to conserve soil moisture, reduce salt accumulation on the surface and ameliorate soil physical constraints. The possible options for crop intensifying are discussed below: 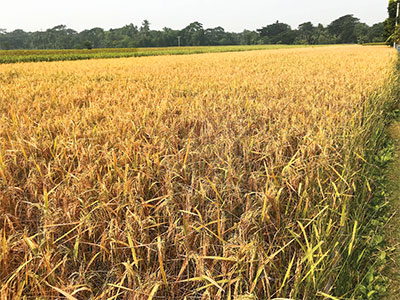 One of the main constraints for dry-season crop establishment in the coastal area is freshwater scarcity. River water salinity is < 1 deciSiemens per metre during the monsoon (June-November), but during the dry season, salinity starts to increase from December and reaches the peak in April-May (> 20 deciSiemens per metre). The high salinity of water during the dry season restricts water availability for plants and reduces the final yield. In the polder area of Southern Bangladesh, there are many internal canals and creeks connected with the river. For example, in polder 30 and 31 in Khulna district, there are approximately 136 and 190 km active canal, which can be used for rainwater harvesting or freshwater storage before river water salinity goes above the permissible limit. There is a good prospect to harvest rainwater for irrigation in this area as monsoon rainfall is over 1,500 millimetres and natural reservoirs are capable of storing this water. The less saline river water stored in the internal canal network in the last week of December could be profitably used for irrigating dry season crops. A mini pond covering 3-5 % of farmland surface area can be used to store run-off or flood water during monsoon for irrigating dry season crops that are crucial for increasing yield. Irrigation in the dry season can contribute to the removal of soluble salts from the crop root zone by leaching, which can help for the reclamation of agricultural land and for increasing the cropping area.

In the coastal zone, non-rice crop establishment is challenging because crops are often damaged by salinity and drought due to lack of freshwater irrigation and water logging by post and pre-monsoon rain. The dilemma is that early rabi crop establishment can be delayed by excess soil moisture after harvesting of Aman rice, which limits timely soil preparation, while the delay in seed sowing exposes the crop to soil dryness, salinity, and possibly heat stress later in their growth. Therefore, for early sowing between mid-November to mid-December, zero tillage dibbling of seed into wet soils could be a reliable crop establishment. With this establishment, the crop can utilize maximum soil residual moisture and avoid salinity risk in the later part of the growing season as well as water logging due to pre-monsoon rain. However, the study showed that mechanized zero tillage on wet-clay soil is less effective than reduced tillage like bed planting and single-pass shallow tillage because zero tillage causes soil surface dryness, soil compaction and increasing soil salinity, thereby decreased yield. For the mechanized establishment of dry season crop, reduced tillage (bed planting or single-pass shallow tillage) would be the best practice for increasing soil water availability, reducing soil salinity, and increasing crop yield.

In southern Bangladesh, the common problems for dry-season crop cultivation in the clay-textured saline soil are soil compactness and surface dryness, increased soil salinity, and cracking. In many parts of the world, mulching is being practised to conserve soil moisture, increase water use efficiency, mitigate soil salinity and soil physical constraints and boost crop yields. Rice straw is a biodegradable organic material suitable for use as mulch in many climatic conditions. A recent study in this area reported that rice straw mulch application on the soil surface (~ 5 ton per hectare) significantly improved sunflower growth and yield by improving soil water storage and diminishing soil salinity, soil compactness, and cracking. However, the adoption of straw mulch technology for crop and soil management in this area depends on mulching material availability because straw mulch has values for animal fodder, fuel, and domestic purposes.

The selection of crop species is a crucial consideration in saline agriculture. Some crop cultivars have a more remarkable ability to withstand the effects of root zone salinity and water stress within most species. For cropping system intensification, the desirable characteristics of selecting salt-tolerant cultivars should be (i) high economic value, (ii) tolerance to salinity, (iii) ability to tolerate saline irrigation water, and (iv) a good fit in the crop rotation.

Crop responses to salinity differ widely from highly tolerant to extremely sensitive. For example, barley and cotton are considered highly salt-tolerant crop species, while wheat, maize and sunflower are considered moderately salt-tolerant. Recently, sunflower in the south-west coastal region of Bangladesh has been considered a promising crop as a source of edible oil with high polyunsaturated fatty acid content (about 90% linoleic and oleic acids). It has moderate drought tolerance with the potentiality to use soil water more efficiently because of its deep branched root system. Sunflower is also an eco-friendly and diversified crop as it needs a small quantity of irrigation water (~ 50 mm), small amounts of pesticide and insecticide, and it can be grown with minimum soil disturbance and with other cereal crops in inter-cropping systems. Recent studies in the south-west coastal region of Bangladesh demonstrated that potato, maize, barley, wheat, and sunflower established by zero tillage after Aman rice have the potential to increasing cropping intensification.

To sum up, in the coastal zone, cropping intensity and productivity is much lower than the country average. The misperception is that dry season crop establishment in this area is impossible due to poor drainage and soil salinity. However, there is a possibility to greatly increase cropping system productivity using improved agronomic practices such as drainage, adjusting sowing time, zero and reduced tillage and mulching. There are essential government supports and social involvement to implement better soil and crop management considering these technologies for cropping system intensification in the coastal region.

The writer is a Senior Scientific Officer, Irrigation and Water Management, BRRI, Gazipur-1701