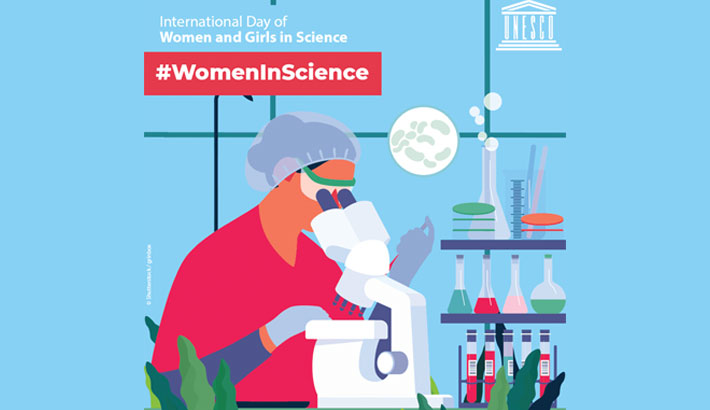 We have been living in a stereotypical world where the gender gap and long-standing social stigma have stopped girls and women from pursuing their academic and professional careers in Science and Technology. Since our childhood, we have been ideologically conforming to this notion that girls read arts. Science is not their cup of tea. It is a boyish matter which demands mental clarity, rational and calculative mind which are conventionally possessed by boys and men. However, a few remarkable women have proved to be very competent and efficient in science by their outstanding works. The acknowledgement is still lesser than the participation of women in Science. Still, the good thing is that for the last six years, women’s contribution in science has been celebrated as an international day.

In 2015, the United Nations General Assembly declared 11 February as the International Day of Women and Girls in Science. The primary mission was to diminish the gender gap and achieve full and equal access to and participation in science for women and girls around the world. According to a research, only 30 percent of worldwide researchers are women. And among these participants only very few get recognition. In Bangladesh, around 40 percent students in Science faculty are females. In biological science and medical education, the percentage is even higher. However, the number of female educators and researchers in the aforementioned fields is not adequate.

Recently in 2020, Bangladeshi Scientist Dr. Firdausi Qadri has won the 22nd L'Oréal-UNESCO women in science award for her formidable work in understanding and preventing infectious diseases affecting children in developing countries. It is a matter of a great pride for us that a Bangladeshi woman received the international recognition she deserves. Every year, L'Oréal-UNESCO presents this award to five women from five regions. Dr. Qadri received this prestigious award from the Asia-Pacific region. However, as Bangladeshi people, we take the privilege to feel proud of her.

We are familiar with the names like the American chemist Alice Ball, the British chemist Rosalind Franklin and the famous scientist of all time Marie Curie. How many of us are aware of our own Bangladeshi female scientists? It is time we celebrated the name of Firdausi Qadri who has been working as a health sector researcher. It is time we recognised the name of the award-winning scientist Nasima Akhter who has been rigorously working in the area of nuclear medicine and ultrasonography. It is time we saluted Sayeba Akhter for winning the second highest civilian award Ekushe Padak for dedicating her entire career to eliminating obstetric fistula.

These are only a handful of glittering names who have made us feel proud by showing a path of enlightenment. Nowadays, more girls opt for physical, chemical and medical sciences. However, it becomes very difficult for many women to become leaders.  Many girls start to read in science department, but eventually drop out because they think that one needs plethora of time for becoming a scientist. Dr. Qadri, in one of her interviews, clarifies that this notion is wrong. She says that one needs to pay attention and concentration to become a scientist. Nevertheless, the seed of interest in science should be planted in the childhood.

The patriarchal society must come out of its dominating attitude and help grow this plant of interest in girls and women. One of my friends passed her MBBS with a lot of dreams of going ahead. While looking for a suitable groom for her, she unfortunately met a few mismatched suitors who never focused on her educational achievements, rather criticised her for being brown and a little chubby. That was okay for her, living her entire life listening to racist comments. However, one of the suitors, who is a doctor himself, gave her a condition that she would not be able to read further. Her MBBS would be the last degree if she married him. Fortunately, she is now married to a man who gives her constant motivation and support to grow and fulfill her dreams.

Marriage can be called a social ladder for the under privileged women in our country. But it can be a social and educational shackle for the qualified women out there if the in-laws turn out to be demanding. We live in a developing country. We still have a lot to do for the sake of sustainable development. Women who work in scientific sectors still cannot work their best. Working mothers are afraid of keeping their children in daycare centers due to the poor and unreliable services. Single women suffer from social labels of being manipulative and “characterless” when they work for late hours. For all these reasons, women lack confidence in them which ultimately prevents them from walking towards their dreams.

Girls, in our country, have instilled in them that science is not for them. They believe it because they do not find role models around them. They do not find role models because women’s contribution to any sector is often unnoticed and unrecognised by the society. Therefore, it is important to support women in all possible way so that they can also become remarkable scientists. Gender disparity plays a vital role in suppressing women’s abilities.

When we talk about gender parity, it is important to know that we talk about parity in cerebral opportunity, not in terms of physical capabilities. It is an inevitable truth that biologically men and women are very different creatures. We are created in certain way that we need each other to survive and sustain future generations. So, let us not start this debate all over again. We are just hoping to give and seek equal cerebral opportunity so that both men and women can offer their better versions to the society for its better development.

Without gender parity and scientific uprising, we won’t be able to reach the sustainable development goal of 2030. Therefore, let us encourage our daughters, sisters, mothers, friends and all the female counterparts to take part more in science. The society is like a tree in which men and women form the equal half portions. Imagine, half of the tree grows and the rest half remains tender, small and weak. Now, visualise the vulnerability of this tree which can break any time. Therefore, in order to sustain the stability of the society, let us support women to increase the number of their participation in science. Let's celebrate the International Day of Women and Girls in Science. The theme of this year is women scientist at the forefront of the fight against COVID-19. We salute the women scientists for standing out with magnificent grace, courage and intellect. Bravo!