US-Bangla a gateway to gold smuggling ! 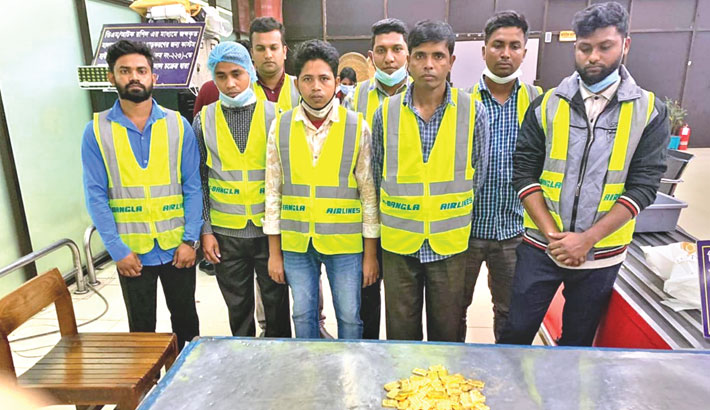 Eight employees of US-Bangla Airlines were arrested by Customs Intelligence and Investigation Directorate on Tuesday after 60 gold bars worth Tk 47.8 million were recovered from an aircraft at Hazrat Shahjalal International Airport in the capital. – SUN PHOTO

Sixty gold bars worth about Tk 47.8 million were seized from an aircraft of US-Bangla Airlines at Hazrat Shahjalal International Airport in Dhaka on Tuesday.

Eight staff members of US-Bangla Airlines were also arrested in connection with the smuggling of the precious metal.

The Customs Intelligence and Investigation Directorate (CIID) seized the illegal gold which was being smuggled into Bangladesh from Dubai.

Tanvir Ahmed, assistant director of the CIID, said, “We got information that gold could be smuggled through the flight BS342 of US-Bangla Airlines from Dubai.”

In the direction of the CIID Director General, a team, led by CIID Assistant Director Iftekhar Alam Bhuiyan, took position at the airport, he added.

Iftekhar Alam said: “When the flight BS342 of US-Bangla Airlines landed at HSIA around 7:00am, we searched it and found 60 gold bars weighting nearly 7kg.”

“The smuggled gold was hidden inside the food storage of a Hi Lift Covered Van of catering service.”

Mohammad Neazur Rahman, additional director general of the CIID, suspected that employees of the US-Bangla Catering Service are involved in the gold smuggling.

Two separate cases were filed in connection with the seizure of the smuggled gold.

US-Bangla Airlines Ltd is allegedly being involved in smuggling gold into Bangladesh as many smuggled consignments of the precious metal have been seized from the flights of the private airline company in the last several years.

Some employees of the US-Bangla Airlines Ltd have already admitted to courts that they are involved in gold smuggling, sources concerned said.

Dhaka Customs House seized 7.29kg of illegal gold worth nearly Tk 50 million from a passenger of US-Bangla Airlines flight which landed in Dhaka from Muscat, the capital of Oman, on January 22.

Customs officials also seized 4.64kg gold from another flight of the US-Bangla Airlines on January 11 in 2020.

They also seized 3.71kg gold worth about Tk 30 million from the driver of a US-Bangla passengers-carrying bus at the same airport on July 31 last year.

Customs officials also seized 14kg gold worth around Tk 70 million from a US-Bangla aircraft on April 20, 2019. In another incident, Rokeya Sheikh alias Moushumi, a cabin crew of the US-Bangla Airlines, admitted to a court that she was involved in gold smuggling on September 9 the same year.

Besides this, a US-Bangla employee was caught red-handed with three gold bars by customs officials on November 22 in 2019.

A report by a law enforcement agency says that more than 100 people were arrested and 70 cases filed in 2019 in connection with the smuggling of gold through the airports in the country.

According to customs sources, in recent times the law enforcement department identified 27 local and international syndicates who are directly or indirectly involved in gold smuggling through the three international airports.

Of the syndicates, seven are involved directly in gold smuggling at Dhaka airport while three at Chattogram airport and one at Sylhet airport.

Airport sources said Bangladesh has become a safe route to gold smuggling due to its suitable geographic location.