GDP growth to shoot up by 2pc on completion 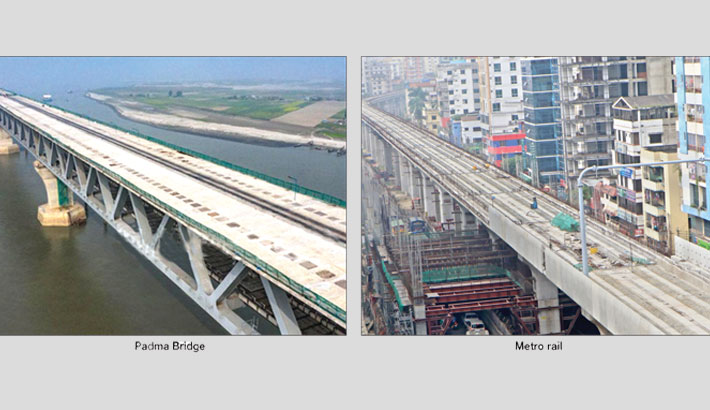 The government’s top priority megaprojects, seen as transformational schemes, have advanced more than 55 percent on an average until the first half of the current 2020-21 fiscal year.

Nine fast-track projects posted a 56.31 per cent overall progress until December last year with the Padma Bridge project advancing the most, suggest the latest official data.

The projects are expected to boost Bangladesh’s GDP growth by two percent.

“Communications system will improve and the economy will become more connected in addition to making the transport of goods and passengers cheaper and more efficient. These projects will also help improve sustainable power generation. As a result, investment will see a boost and more jobs will be created,” he added.

In particular, more job opportunities will be created in the service sector, which will help the country attain a higher growth rate in line with its long-term development vision.

Padma Bridge: The Padma Bridge project touched a milestone with the installation of the last span in December 2020.

The 6.15km bridge project has so far seen 83 per cent overall progress with the main bridge construction work advancing 91.50 per cent and river training work 76 per cent.

Currently, the work of installing road and railway slabs are underway. Bridges Division, the implementing agency, expects to open the bridge to the public by June 2022.

Metro Rail project: Project activities gained momentum recently after a facing a setback due to the Corona pandemic. Its current completion deadline is June 2024.

Until November, the project saw a 52.24 per cent overall progress with the total expenditure of Tk 120.40 billion.

The first phase of the priority project from Uttara to Agargaon so far made 77.57 per cent progress, while Agargaon-Motijheel part saw 47.49 per cent and the newly added Motijheel-Komlapur segment made 41.39 per cent progress.

Rooppur nuclear power plant: The country’s lone nuke power plant is being set up at Rooppur, Pabna to meet the December 2025 deadline.

Total expenditure in the project so far stood at Tk 342.13 billion to post 30 per cent physical progress and 25 per cent financial progress.

Padma Rail Link: The project started in January 2016 to establish a director rail link between the capital Dhaka and southern-western town of Jashore through the under-construction Padma Bridge.

The project is expected to be completed by June 2024. By December last year, it advanced 34 per cent physically and 37.39 per cent financially with a total expenditure of Tk 146.72 billion.

Dohazari-Ramu-Cox’s Bazar-Gundum duel gauge rail line: The work of the project designed to improve tourism started in July 2010 and will finish in June 2022.

Until December last year, the total expenditure in the scheme was Tk 51.40 billion. The physical progress has so far been 47 per cent with 28.50 per cent financial progress.

Payra Sea Port: The project is being implemented during the July 2015-June 2021 period to construct the country’s third seaport in Payra, Patuakhali.

So far, Tk 26.89 billion has been spent on the project to post 80.26 per cent financial progress and 73.34 per cent physical progress in the first phase of the scheme.