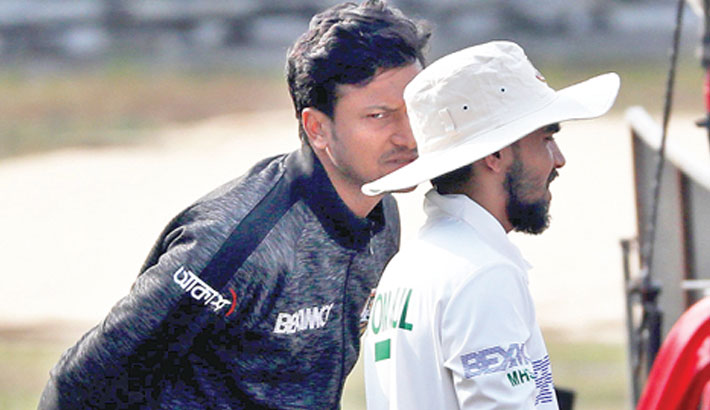 Bangladesh Test skipper Mominul Haque on Sunday lamented for not getting Shakib Al Hasan’s service in their bowling against West Indies in the opening Test in Chattogram.

Shakib could not be part of the game for Tigers in the Test following his thigh injury that he sustained during the second day of the Test.

Though he arrived in the field and even had a brief meeting with the team-mates ahead of the tea session on the final day he failed to make him available for the game as he was under observation.

“Shakib bhai is an experienced campaigner and he would have guided the spinners like no one else and make them more disciplined. So yes, we have missed him, a great deal, mostly his bowling capabilities, in this match,” said Mominul after losing the Test by three wickets.

“This is the first time Shakib bhai is playing under my captaincy as I didn’t have the opportunity to think it out before. But yes, having the guidance of such a global inspiration is more than I can ask.

“But mostly I missed him being the leader of our spin bowlers, as even though our spinners, Taijul (Islam), Miraz (Mehidy Hasan) and Nayeem (Hasan) all are quite good and proven match-winners, we may have been a bit unlucky today.

“We had missed several spots to put the balls in the right places, Shakib bhai would definitely have made a difference there,” he added.

Having recovered from his previous groin injury ahead of the first Test and successfully managing to bat in the Bangladesh first innings as well as bowled six overs, all-rounder Shakib suffered a strain in a different region of his left thigh while fielding on the second day.

Debutant Kyle Mayers scored a brilliant unbeaten 210 runs to leave Bangladesh in awe as West Indies made 395-7 and notched an astonishing win to go 1-0 up in the two-match series in Chattogram.

Mominul however, admitted that their bowlers failed to fire as a unit and could not bowl in the right areas.

“It was definitely unexpected but as you know, cricket is a game of total uncertainties and we can never be sure of certain outcomes in any part of it. In my estimation, we couldn’t bowl to the right areas,” he said.

“I would mostly blame the missed chances and opportunities most. The wicket was good and it provided opportunities to the bowlers too but we couldn’t grab it. As the wicket is as such, once you get set in, it would be very difficult to get you out,” he added.