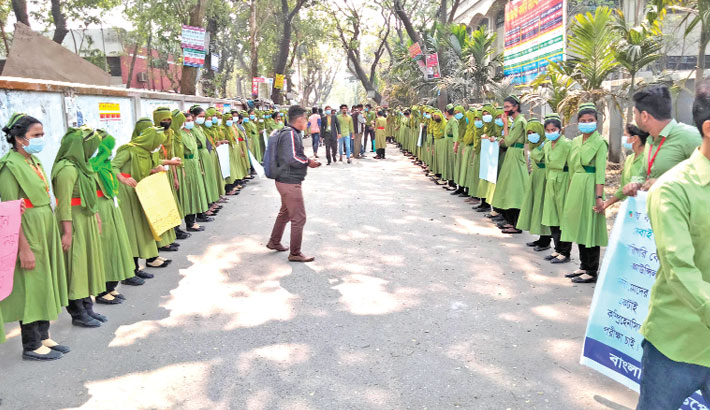 Students of Joypurhat Nursing Institute form a human chain in front of the Civil Surgeon office on Saturday, demanding scrapping of equal status given to the students who completed only six-month course under the technical education board. — Sun Photo

JOYPURHAT: The Nursing Institute students here on Saturday staged demonstrations demanding the cancelation of equal status to those who completed the technical nursing course.

They formed an hour-long human chain in front of the Civil Surgeon office in the district.

President of the union Oishee Islam, student leaders Nazir Hossain, Mohana Akhter, Tania Khatun and others spoke at the programme.

They said according to the government rules, one, who has passed the HSC, becomes a professional nurse after completing the course from a Nursing Institute and passing the departmental examination.

But recently, those, who have completed a six-month course from the Technical Education Board after passing the SSC, have been given the equal status.

They urged the government not to recognise them as professional nurses who just completed the six-month course under Technical Board.

After demonstration, they brought out a procession in the district town and paraded around the district administration premises.