‘Fizz needs to work on his follow-through’ 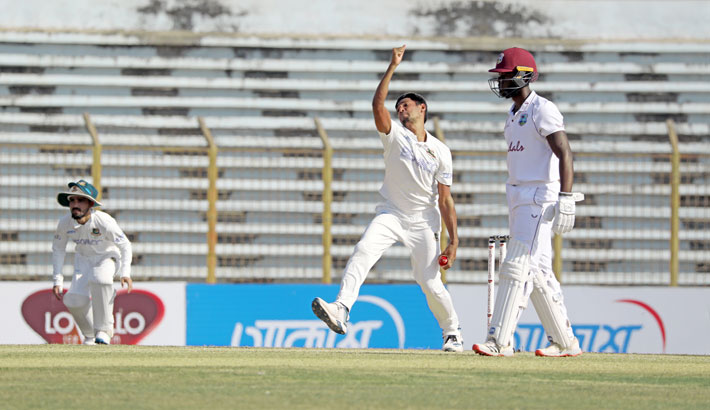 Bangladesh pacer Mustafizur Rahman needs to work on his follow-through and landing in-order to bowl from close to wicket without getting any warning for walking in the danger zone, said a Bangladesh Cricket Board coach on Saturday.

“He needs to work on his follow-through and landing so that there is no warning issue for him,” BCB game development coach Mahbub Ali Zaki told The Daily Sun.

“For him, bowling close to the wicket is the safest option as that will help him bowling that delivery which comes into the batsman. But he is getting those warnings as his landing position is not perfect. “Probably if he lands around four inches away from where he is landing now and works on balancing his body to go away he will be able to bowl close to the wicket and that is crucial for him because bowling away from the wicket won’t fetch him much success,” he added.

Mustafizur looked as if he was regaining his old form when he bowled with real venom to pick two wickets in the opening spell during the first innings of West Indies.

However, he received two warnings for hitting the danger zone after that spell and he looked to have gone haywire.

In the second innings, he also got a warning and the captain took him away afterwards.

One of the reasons Mustafizur’s bowling performance has recently changed is to bowl close from the stumps while bowling over the wicket against a right-handed batsman.

This provides a good angle and seam movement through wicket-to-wicket bowling and as a result the chances of a leg-before wicket and bowled out have increased highly.

In addition to it, the economy rate has improved significantly as the batsmen are taking fewer runs to those deliveries, due to the lack of room for the batsmen to play.

But due to the danger zone warning from the umpire, Mustafizur has been seen bowling again from his previous position.

Having to compromise on getting the ball inside, as incoming deliveries against the right-handers have decreased and as he has to pitch the ball outside the leg stumps if he wants to hit the stumps there is less chance for LBW.

As the bowler pitches the ball at the stump-line, due to the angle it is going out of the off stump there is excessive room for the batsman and as a result, the batsman is getting the opportunity to play aggressive shots due to room and power.

Mustafizur is being forced to go round the wicket against a right-handed batsman and that is not the best option when the ball is relatively new and as a result, his overall confidence got hurt.