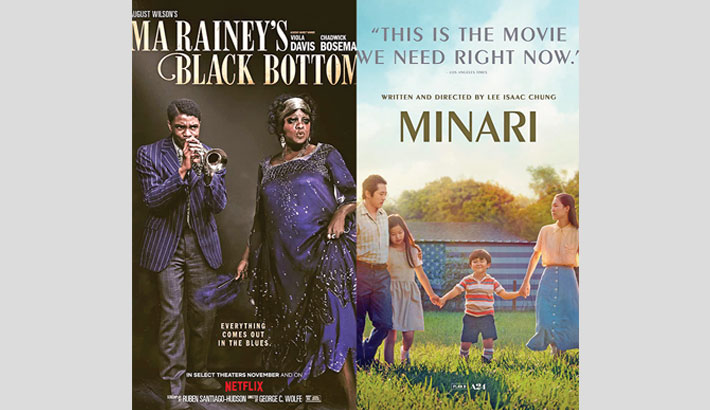 The nominations for the 27th Screen Actors Guild Awards 2021 (SAG) were announced Thursday in a virtual ceremony featuring Lily Collins and Daveed Diggs reading off nominees in 13 film and TV categories honoring the best acting of the past year, reports Deadline.

Much like it did at the Golden Globes the day before, Netflix led the way with 30 total nominations. The Outstanding Performance by a Cast in a Motion Picture ensemble race features three Netflix dramas: Da 5 Bloods, Ma Rainey’s Black Bottom and The Trial of the Chicago 7 along with A24’s Minari and Amazon Studios’ One Night In Miami. Outside of Chicago 7 it is a fully new slate of films from the admittedly apples-to-oranges Best Motion Picture lists set by the Golden Globes on Wednesday.

Last year, Parasite won the film ensemble award, pushing it down the road to the eventual Best Picture Oscar.

Other notables o the film side include Chadwick Boseman picked up four  posthumous noms for his roles in Ma Rainey and Da 5 Bloods, and Minari, the Korean American drama from Lee Isaac Chung, showed well with the Ensemble nom plus mentions for Steven Yeun and Youn Yuh-Yung.

On the TV side, Netflix’s buzzy Bridgerton is in the SAG mix with a Drama Ensemble nom alongside fellow Netflixers The Crown and Ozark, joined by AMC’s Better Call Saul and HBO’s Lovecraft Country. In Comedy, more awards-season love for Apple TV+’s Ted Lasso (Jason Sudeikis also got a nom) which was joined by Netflix’s Dead To Me, HBO Max’s The Flight Attendant, Hulu’s The Great and Pop TV’s Schitt’s Creek which like its Emmy sweep has acting noms for its acting quartet.

The Crown and Schitt’s Creek co-led among TV series with five noms apiece.

After this nomination, final voting by the guild’s eligible members begins February 16 and runs through March 30. This year’s SAG Awards will air live Sunday, April 4. The awards show originally was set for January 24 but has changed twice, first due to the Covid-19 pandemic and again to move off the new date set for the rescheduled Grammy Awards.