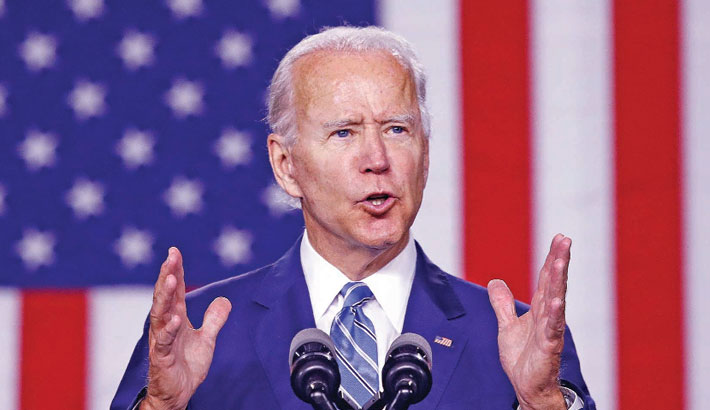 In his first major speech on foreign affairs as president, Biden also froze former president Donald Trump's plans to redeploy troops from Germany and vowed a tough approach against what he described as a rising authoritarian threat from China and Russia.

Biden and Vice President Kamala Harris traveled together to the State Department in a symbol of a renewed focus on diplomacy after Trump's tumultuous four years. "America is back. Diplomacy is back," Biden told a socially distanced auditorium of diplomats.

In a speech shortly afterward, Biden said the United States would end all support including connected arms sales for ally Saudi Arabia's war in Yemen, which he said "has created a humanitarian and strategic catastrophe."

He appointed a US special envoy for Yemen, veteran diplomat Timothy Lenderking, who Biden said would support UN efforts to reach a ceasefire and revive peace talks between the government and Huthi rebels who control much of the country, including the capital Sanaa.

"This war has to end," Biden said.

Saudi Arabia reacted to Biden's speech by reasserting its commitment to a political solution in Yemen, according to state media.

Riyadh also welcomed Biden's "commitment to cooperate with the kingdom to defend its sovereignty and counter threats against it," the official Saudi Press Agency added.

Trump -- who argued arms sales were creating US defense jobs -- viewed the war as a way to hit back at the Huthis' ally Iran.

Biden backs a return of diplomacy and a nuclear accord with Iran but, strikingly, he only indirectly mentioned Tehran in what was billed as a broad-brush speech on his international priorities.

Secretary of State Antony Blinken also said he will revisit Trump's last-minute designation of the Huthis as a terrorist group.

In Yemen, senior political official Hamid Assem voiced hope that Biden's plan will mark the end of a six-year war that has left tens of thousands dead.

"The Biden administration saw that the war in Yemen carries a heavy cost and that America's reputation has been tarnished by the killing of the people of Yemen," he told AFP.

In another sharp reversal, Biden said the United States will welcome up to 125,000 refugees in the first fiscal year of his administration -- far above the record-low 15,000 last approved by Trump, who was a vociferous critic of non-Western immigration.

"The United States' moral leadership on refugee issues was a point of bipartisan consensus for so many decades when I first got here," said Biden, who was elected to the Senate in 1972.

"We shine the light, the lamp, of liberty on oppressed people. And our example pushed other countries to open wide their doors as well."

Biden also put on hold plans set in motion by Trump to reduce the US troop presence in Germany, a cornerstone of NATO security since the start of the Cold War.

Trump's decision was seen as linked to his tense relationship with German Chancellor Angela Merkel -- whose welcome to mostly Syrian migrants he belittled.

Defence Secretary Austin Lloyd later said he had ordered a Pentagon review of US military "force posture" around the world in consultation with allies.

Biden has pledged to keep up Trump's hard stance on China -- but also to toughen the US stance on Russian President Vladimir Putin, for whom the defeated US president voiced admiration.

"I made it clear to President Putin -- in a manner very different from my predecessor -- that the days of the United States rolling over in the face of Russia's aggressive actions, interfering with our elections, cyber attack and poisoning its citizens are over," Biden said.

Moments before the speech, the State Department said that Blinken spoke by telephone with Russian Foreign Minister Sergei Lavrov and, among other issues, raised the purported poisoning of opposition leader Alexei Navalny -- who was arrested last month on his return to Moscow and has inspired thousands to take to the streets.

Biden said the United States "must meet this new moment of advancing authoritarianism including the growing ambitions of China to rival the United States and the determination of Russia to damage and disrupt our democracy."