Suhrawardy Hospital a hub of irregularities 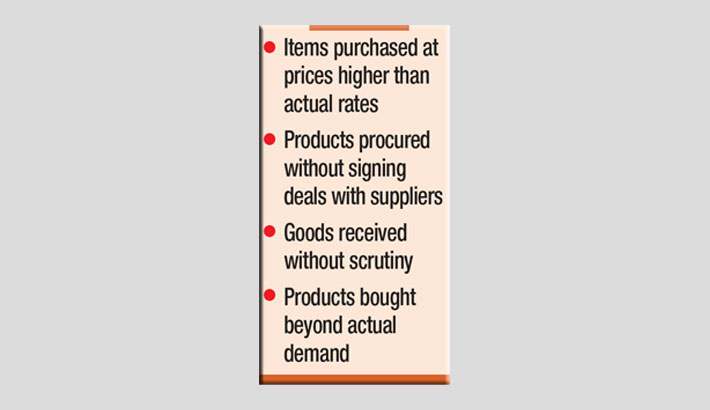 It violated the Public Procurement Rules 2008 and public expenditure management during the procurement.

The hospital authorities also received products without scrutiny by survey or goods committee, bought various items beyond the actual demand, and did not take security deposits against work orders and sign deals with suppliers, according to the report of the audit conducted by the Directorate of Health and Family Welfare Audit for 2019-20 financial year.

There was also lack of transparency in awarding work orders to lowest bidders, it said.

SSMCH Director Dr Khalilur Rahman told the Daily Sun that the past director was responsible for the anomalies.

He said only the higher authorities, including the Health Ministry and the Directorate General of Health Services (DGHS),

can take action in this regard. “I have nothing to do as anomalies did not occur during my tenure, not even in this fiscal year,” he said.

“But I would like to say one thing that I’ll remain alert so that there’re no such graft and irregularities during my tenure,” Khalilur added.

Despite repeated attempts, former SSMCH Director Dr Uttam Kumar Barua, who was made an officer on special duty (OSD) for his involvement in irregularities in the procurement, could not be reached for comments.

The Health Ministry earlier found Uttam’s involvement in corruption in purchase involving Tk 64 million, according to a show-cause notice served on him on October 29 last year.

According to the audit report, the SSMCH authorities bought medicines worth Tk 28,991,645 at a much higher price than the actual one, causing a loss to the tune of Tk 2,886,480 to the national exchequer.

Besides, SSMCH caused a financial loss of Tk 12,195,906 after buying disposable syringes, IV cannulas and gloves at a higher price than the market one.

It purchased products worth Tk 7,437,450 from outside but the hospital authorities could have saved government money of Tk 4,760,713 had they bought those from the Institute of Public Health, the report mentioned.

Besides, bills to the tune of Tk 13,257,100 were paid to contractors although they failed to fulfill the tender specifications for supplying bed sheets, pillows, mosquito nets, blankets, aprons and other goods due to negligence of the survey committee, the report cited.

During a visit to the storeroom, the audit team found that there were sufficient reserves of MSR goods but the hospital bought more in the following fiscal year, which caused wastage of public money.

Besides, the government faced a loss of Tk 63,328,870 as the audit team did not find the accurate balance of distribution of MSR equipment, gauge bandage cotton, chemical reagents, dengue devices and Mythic 22 items.

According to the audit report, the hospital authorities violated the Public Procurement Rules 2008 as it did not take security deposits from suppliers against work orders.

The hospital authorities issued work orders to 65 contractors for Tk 332,958,638 but it did not take security deposits against work orders for Tk 294,510,370. Even, bills were paid to them eventually.

According to the Public Procurement Rules, 10 percent security deposit on the contract value is a must for product and service-oriented work.

The SSMCH did not take approval from the higher authorities while buying goods worth Tk 298,900,000 and it also bought goods of Tk 134,419,797 by exercising financial expenditure authority.

According to the rules, divisional or regional office can buy products of highest Tk 5 million through a single work order.

There are many irregularities found in signing agreements with suppliers, including avoiding the mentioning of contract value and issuance of several work orders under single agreement and more work orders than the number of contracts signed, report cited.

However, no deed was found for buying of MSR (gauge and cotton) goods although there were two suppliers.

In many cases, no value of contract and security deposit was fixed in the deals, the report cited.

More than one supplier became lowest bidder for several products but the SSMCH did not issue work orders to the lowest bidders, which is a violation of section 31 of Public Procurement Rules.

According to the rules, the authorities concerned have to take suggestion from the TEC if there is more than one bidder for a single product but there was no evidence of taking the committee’s advice in this regard.

The audit also found irregularities in receiving goods. Bills were paid to suppliers although they failed to meet specifications of tenders and agreements.

According to the report, a contractor received the full bill for supplying clear adhesive tape (5cm*10m) but the actually 5cm*9m one was supplied due to a nexus between the supplier and the hospital authorities.

The authorities bought clear adhesive tape (5cm*10m) without signing any deal although there was no demand for it, causing Tk 10,201,880 in losses.

The SSMCH also violated directives of the Health Ministry as it spent additional Tk 33,654,103 than the allocation. According to the directives, hospital authorities can buy MSR (chemical and reagent) products 5 percent of the total allocation. Some Tk 314,500,000 was allocated for the SSMCH hospital.

Besides, the hospital authorities spent additional Tk 51,215,838 for purchasing medicines from outside than its allocation.

According to the rules, a hospital can buy some 25 per cent of medicines from vendors while 75 per cent drugs must be purchased from Essential Drugs Company Limited (EDCL) and Institute of Public Health.

Additional Secretary (Audit and Financial Management) of the Health Services Division Mohammed Shahadat Husain told the Daily Sun that action will be taken against those involved in such anomalies. “We’ll settle those audit objections after getting proper replies. Or else, money will be recovered from those responsible,” he said.