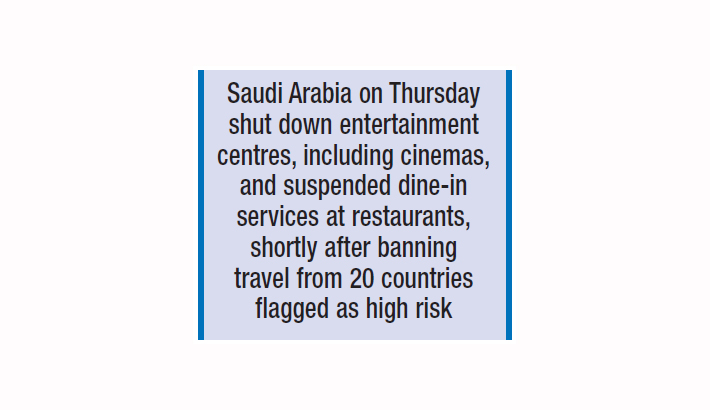 DUBAI: The wealthy monarchies of the Gulf are intensifying coronavirus containment measures as cases jump, compounding the economic woes caused by slumping oil revenues which are the region’s lifeblood, reports AFP.

Gulf economies have struggled as the coronavirus sapped global demand for petro products including aviation fuel, in a double hit after lockdowns they imposed at the start of the crisis wreaked financial havoc.

But after months of steadily declining infections last year, the Gulf has seen a sharp uptick in 2021, and cases across the six nation Gulf Cooperation Council bloc rose 6.6 percent in the past seven days.

In response, governments are gradually rolling out restrictions, while avoiding new lockdowns that would damage prospects for economic recovery.

Saudi Arabia on Thursday shut down entertainment centres including cinemas and suspended dine-in services at restaurants, shortly after banning travel from 20 countries flagged as high-risk.

The number of daily infections in Saudi Arabia decreased to less than a hundred in early January from about five thousand in June, before doubling in recent days to more than 300.

The kingdom has recorded some 369,000 cases and 6,400 deaths since the crisis began, the highest in the Gulf.

Qatar this week tightened rules on indoor social and sporting gatherings while slashing the number of customers permitted in hospitality settings as a closely watched FIFA tournament of the world’s leading football clubs begins.

Kuwait on Wednesday banned non-citizens from entering the country for a period of two weeks, and cut opening hours for non-essential retail stores.

In Dubai, seen as a playground for the rich and famous escaping their own country’s lockdowns in recent months, popular weekend “brunches” offered at many hotels have reportedly been cancelled.

With daily cases regularly setting new records in the United Arab Emirates after a new year spike, non-priority surgeries have been suspended in Dubai, bars told to close and restaurant opening hours shortened.

In the race against the virus, the UAE is relying on an aggressive vaccination campaign, with some 3.7 million doses now administered to the UAE’s population of about 10 million, the second highest in the world after Israel.

Qatar, which has lagged behind other Gulf countries in its vaccination drive, has seen a sharp spike in cases in the past week, up almost a third and with hospitalisations 85 percent higher in January compared to the month before.

Its new measures reduce the permitted number of customers in commercial settings rather than mandating the closure of any sector of the economy.

Restaurants and cafes that have not been certified as compliant with an official sanitation scheme will see their capacity reduced to 15 percent.

The region saw some of the toughest lockdowns during the first wave of the virus over the summer, with Kuwait declaring an all-out curfew and Saudi sealing its borders for months.

Since the beginning of the epidemic, the Gulf states have recorded more than 1.2 million infections and about 10,000 deaths.

After the region’s economies contracted 4.8 percent in 2020, the International Monetary Fund has forecast the Gulf to grow 2.5 percent this year thanks to a recovery in crude prices and intensive vaccination campaigns.

The IMF estimates that Saudi Arabia, the world’s leading oil exporter and the largest Arab economy, will see growth of 2.6 percent in 2021 after a contraction of 3.9 percent.

“This year we expect a recovery after the year 2020 that was a year like no other where the region faced one of the most severe dual shocks,” Jihad Azour, director of the Middle East and Central Asia Department at the IMF, told AFP.

“Of course, we are in a period of high uncertainty and the race between the virus and the vaccine will define the recovery pace. And this recovery pace will vary between countries depending on access to the vaccine.”