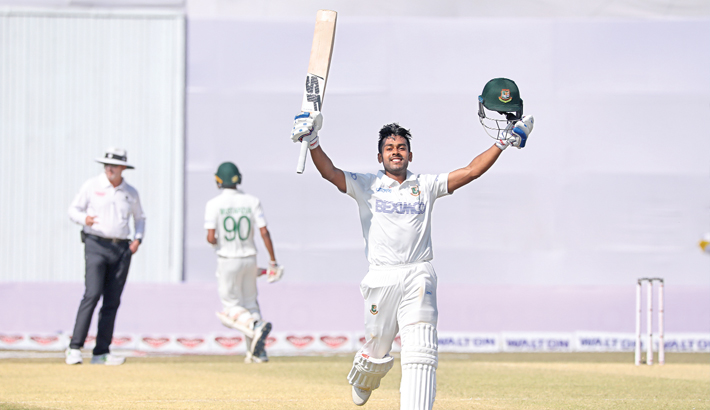 Bangladesh all-rounder Mehidy Hasan celebrates after scoring a century against West Indies during the second day of their first Test at the Zahur Ahmed Chowdhury Stadium in Chattogram on Thursday. — BCB PHOTO

Mehidy Hasan scored his maiden Test ton to put Bangladesh in the driving seat against West Indies at the Zahur Ahmed Chowdhury Stadium in Chattogram on Thursday.

Mehidy scored 103 runs before Bangladesh were bundled out for 430 in their first innings at the cusp of tea break on day two in the first Test of two-match series against the visitors.

West Indies were trailing by 355 runs at the end of the second day after they scored 75-2 at stumps, courtesy a gritty knock of unbeaten 49 runs by skipper Kraigg Brathwaite.

Mehidy, coming to bat at number eight after the departure of Liton Das (38), struck 13 fours in his 168-ball innings that propelled Bangladesh to a formidable total in the first innings. Tigers earlier resumed on 242-5.

Shakib Al Hasan (68) also scored a half-century in his Test comeback innings while Shadman Islam made 59 on the first day that helped Tigers go past 400-run mark only for the fourth time against the Caribbean side in Tests.

Mehidy, who made his debut at the same ground with a flashing performance with the ball against England, also showed his capability with the bat by making two crucial stands with tail-enders, Taijul Islam (18) and Nayeem Hasan (24), which frustrated the visitors.

In the process, the 23-year old became only the fourth cricketer from Bangladesh to score a hundred while batting at number eight after Mahmudullah, Khaled Mashud and Sohag Gazi.

The only concern for the host remained regarding the fitness of Shakib as he looked uncomfortable while trying to stop a ball and in the process looked to have injured his groin.

Shakib bowled only six overs before opting to go out as he was feeling uncomfortable.

A Bangladesh Cricket Board official said that they are not sure whether he is available as everything depends on how he feels in the morning.

“He is resting and we can’t say anything more unless the night is over,” BCB media manager Rabeed Imam told reporters.

“Certainly he had some kind of discomfort so we had taken him out as part of precaution. At present, he is resting and we can’t say anything more unless the night is over,” he added.

The second day completely belonged to the hosts after pace bowler Mustafizur Rahman, who returned to Bangladesh Test XI after a while, picked up two wickets with the new ball to put the visitors into further trouble.

Mustafizur drew first blood by removing Jon Campbell (three) in the fifth over of the innings while he dismissed Moseley (two) in the same fashion.

Brathwaite and Nkrumah Bonner (17 not out) resurrected the ship adding 51 runs for the third wicket stand and kept the spinners at bay.

“Enjoyed it thus far. Still have a long way to go. So (we are) looking forward to the challenge tomorrow (today). We have to continue batting well and keep backing ourselves and our plans,” said Braithwaite after the end of the second day’s play.

“I think it is still a good batting pitch, so tomorrow is a very important day for us. We really have to build some partnerships to get runs on the board. We have to get as close to their score as possible or even go past it. And then obviously from there, second innings would be crucial,” he added.