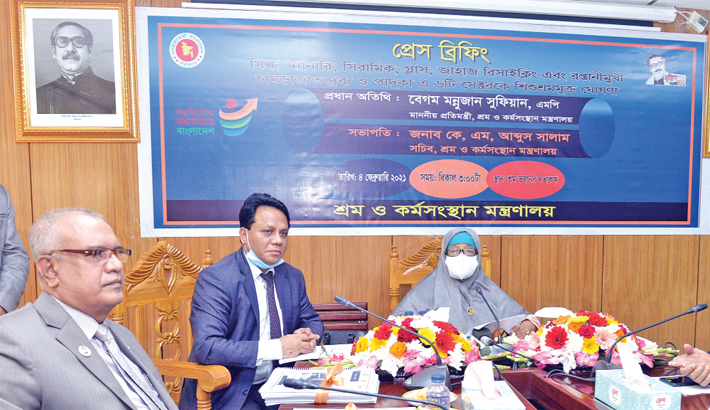 State Minister for Labour and Employment Begum Monnujan Sufian speaks at a press conference on child labour at the conference room of Sromo Bhaban in the city’s Bijoy Nagar area on Thursday.

The government has declared six sectors free from child labour.

State Minister for Labour and Employment Begum Monnujan Sufian Thursday disclosed it at a press conference at Shromo Bhaban in the capital.

The declaration of the government came up after the associations of the sector confirmed the ministry through official letters that they have no child labour.

National monitoring committee has already inspected the six sectors between November and December, 2020 and they have not found any child labour in these sectors.

After the inspection, the committee submitted six separate inspection reports before the ministry.

Begum Monnujan Sufian expressed her hope to get rid of child labour in labour market within 2025 as a part of government’s SDGs target. The minister said the government has adopted policies to ensure proper future growth of children.

Besides, the government has published a list of risky jobs for the children in 2013.

Attended at the press conference, Labour and Employment secretary KM Abdus Salam said the government has already declared 23 incentive packages.  First incentive package was to pay wages to labourers, according to him. He added the ministry is  also working to make some sectors child labour free in the current year.