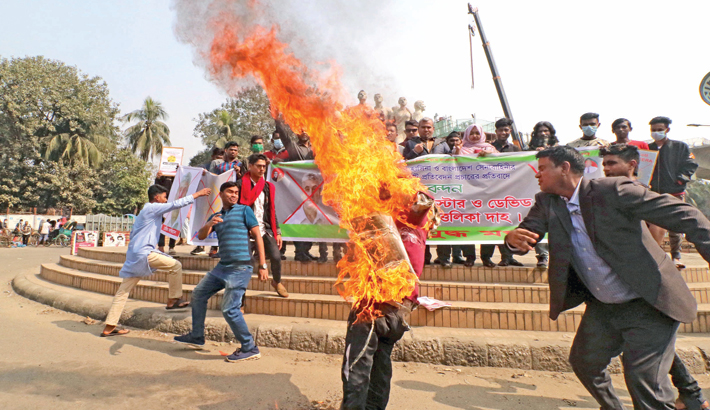 Activists of Muktijoddha Mancha burn logo of Al Jazeera and effigy of David Bergman at the base of Raju Memorial Sculpture on Dhaka University campus on Thursday protesting an Al Jazeera report. — sun Photo

A section of Muktijoddha Mancha has demanded a ban on Al Jazeera broadcasting in Bangladesh for publishing ‘false and defamatory’ report against the Bangladesh government.

They made this demand at a human chain formed at the base of Raju Memorial Sculpture on Dhaka University (DU) campus on Thursday.

They also burned effigies of David Bergman and logo of Al Jazeera for publishing "baseless, false, fabricated and defamatory" report against the Prime Minister Sheikh Hasina, her government and the country’s patriotic army.

"The report titled 'All the Prime Minister's Men' is clearly politically motivated and fabricated," said AKM Jamal Uddin, spokesperson of the organization.

He also said that the television channel has been spreading propaganda about various incidents in Bangladesh since 2009, targeting the government of Sheikh Hasina.