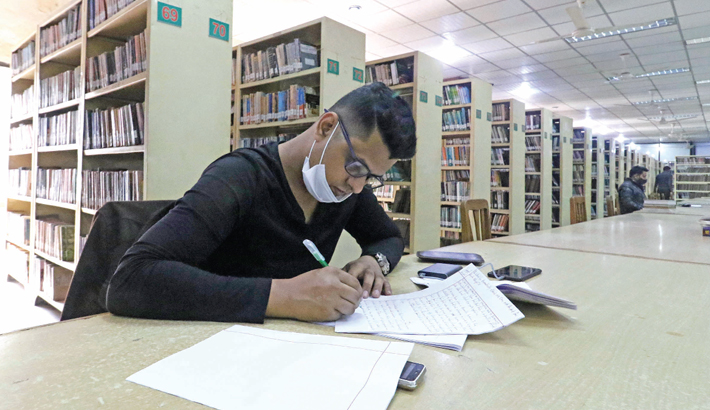 A few readers are seen reading books at Begum Sufia Kamal National Public Library in the capital as reading habit among people declines sharply. The photo was taken on Thursday. — MD NASIR UDDIN

Readers, especially the young generation, have been reluctant to throng libraries for achieving knowledge mainly due to their addiction to modern technology, as the country observes National Library Day today.

Experts said a decline in reading habits, introduction of ebooks, shabby condition of libraries and a busy life style are the major reasons behind the presence of a few readers in the ‘hubs’ of knowledge.

Libraries first need to develop and nurture the reading habits of readers, they opined.

Founder Chairman of Biswa Sahitya Kendra Professor Abdullah Abu Sayeed said, “We’ve built libraries but couldn’t create many readers. Time has changed and people now lead a busier life. That is why books should be taken to their doorsteps.”

“When we would be able to develop reading habits and increase the number of avid readers, libraries will get a new life.”

Anindita Arefin, a bookworm of Dhaka’s Dhanmondi area, said, “I find reading an ebook more convenient. When I can download and store thousands of ebooks and create my own digital collection, why shall I waste time visiting a conventional library.”

Government Public Library, Moulvibazar houses some 25,000 books. It has children’s reading room and job books corner. Besides these, the library provides WiFi facilities, and arranges various programmes to attract readers.

Despite having the huge facilities, the library witnesses only 150 to 200 readers a day.

Md Jalaluddin, junior librarian of the library, said, “We have been witnessing a steady decline in the number of readers as students spend more time on different gadgets.”

“The youngsters who come to us are mostly interested in getting study material for competitive examinations. Rarely do we get requests for classic literary pieces.”

The government public and private public libraries in the country are struggling to attract readers, sources said.

Lack of fund, new books, infrastructure, basic facilities, maintenance, and technology are the key reasons for their setbacks.

According to Department of Public Libraries, there are 71 government public libraries in Bangladesh. But, most of these libraries are in a sorry state and struggling to attract readers.

Director General of Department of Public Library Abu Bakar Siddique said, “We’ve already refurbished six government public libraries and are now going to take a project to modernise 39 more libraries which are in a shabby condition. We’ve also been setting up ‘Bangabandhu Corner’ in 1,000 libraries.”

“We’re taking another project to digitise public libraries which will begin from April this year. Besides this, we’re jointly working with Biswa Sahitya Kendra to promote mobile library service,” he added.

These libraries get a certain amount of money every year from the government. Half of the total allocation is mandatorily spent on buying new books. Library organisers have claimed the rest of the money they receive is quite inadequate to run a library properly.

“We’ve repeatedly submitted our demands to the government for bringing at least a librarian and an assistant from each library under regular pay structure so that these libraries can be maintained well. Besides, we’ve requested the government to increase allocation,” said former general secretary of Non-Govt. Public Library Association of Bangladesh Ashraful Alam Siddik.

“Apart from rent and budget for new books, we need to pay newspaper bills, electric bills, and salary of employees and spend money to organise different programmes. The government allocated money is never enough to do all these things,” he added.