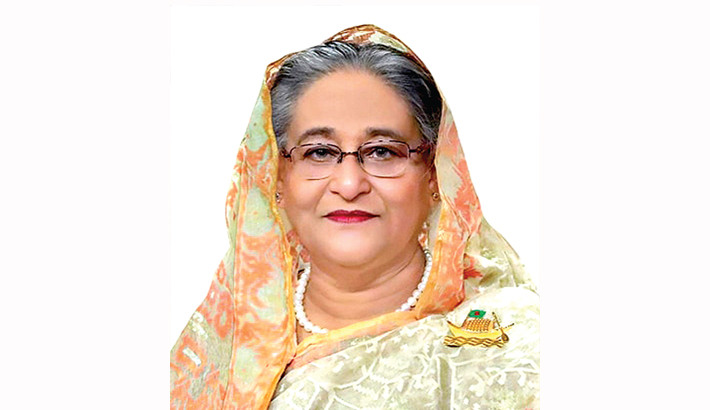 Prime Minister Sheikh Hasina on Thursday laid emphasis on research and crops zone mapping, saying different varieties of crops have to be cultivated on the basis of concerned area’s land fertility, water and environment to yield best outcome at lowest cost.

“We need concrete research and zone mapping on the basis of weather and environment to find out which crops are high yielding with high quality in which areas involving lowest cost,” she said, reports BSS.

The premier said this at the cover unveiling ceremony of “The 100 Agro Technologies Atlas” at Bangabandhu International Conference Center (BICC), joining virtually from her official residence Ganabhaban this morning.

Mentioning the necessity of setting up more regional laboratories to make the agriculture products more quality-full, she said the zone mapping is essential for more and high quality production as Bangladesh is a delta where each variety of crops could be yielded high depending on soil, water, weather and environment in each area.

“We should find out a research method for the zone mapping,” she said, adding it should kept in your (researchers) mind that production is needed to be increased as size of domestic market is being expanded and the same time export of these products is needed for the development of the country.

Besides, the government is also establishing 100 special economic zones across the country where the local raw materials, especially the local agro products, would be given priority for processing to export aboard, she said.

She went on saying, “If we could arrange both local and foreign investment prioritizing area-based products, people of the country would be benefited financially along with increasing the number of export items.”

Sheikh Hasina said the economy of the country depends on agriculture and the government prioritizes agro-based industry and these types of industrialization are needed for the progress of the country.

Seeking researchers’ cooperation, she said measures have to be taken keeping in mind that Bangladesh’s economy is agro-based and its production needs to be boosted and processed to grab both domestic and foreign markets.

Pointing out the increased food grains production as the outcome of research, the premier said, “Without research, none is possible to achieve and it is the reality. We can move further if you (researchers) take more initiatives.”

She hoped the agriculture production, processing and marketing along with others things could be made more technology based through research.

Fisheries and livestock minister S M Rezaul Karim, MP and chairman of the parliamentary standing committee on ministry of agriculture Matia Chowdhury, MP, spoke on the occasion as special guests.

Prime Minister Sheikh Hasina said the “100 Agro Technologies Atlas” published today marking the birth centenary of Bangabandhu incorporating the varieties and technology invented by the scientists would be an inspiration for the next generation and it will also helps the country to be self-reliant further.

Sheikh Hasina said the retirement age in government services has become a problem for those who are engaged in research, especially the agriculture scientists, but the government wants to provide them incentives.

Asking the authorities concerned to place proposals on how the incentives can be given to the scientists, she said, “We need to do something for the agriculture scientists. We want to give them more incentives.”

Mentioning that Father of the Nation Bangabandhu Sheikh Mujibur Rahman had adopted the development of agriculture and farmers as a strategy of the country’s development, the premier said he had given first class status to the agriculturalists to allure them into agriculture profession and established many autonomous agriculture institutions for conducting research.

“The seeds of today’s progress of the country’s agriculture development were planted by the Father of the Nation and we have achieved this unprecedented success in agriculture following his path,” she said.

Highlighting her government’s different measures to offset the impact of Covid-19 pandemic, the head of the government said alongside the 23 stimulus packages of Taka 124,053 crore, two fresh stimulus packages have been declared that would help small businessmen and benefit more people under social safety net programmes.

As part of the election manifesto, she said, the government has tried to modernize the agriculture through mechanization and provided 70,000 agriculture machineries in the last 12 years at reduced prices through 50-70 percent development assistance of their procurement prices.

Referring to the beginning of Covid-19 vaccination, the premier reiterated her call to the people to maintain health protection protocols and wear facemasks until the Coronaviurs disappears from the world.

Mentioning that 99 percent people of the country are now getting electricity; she said no people would remain homeless and address less in Mujib’s Bangladesh.

The Prime Minister also urged the people to continue tree plantation on the occasion of Mujib Borsha.