Tamim still with no answer to Roach 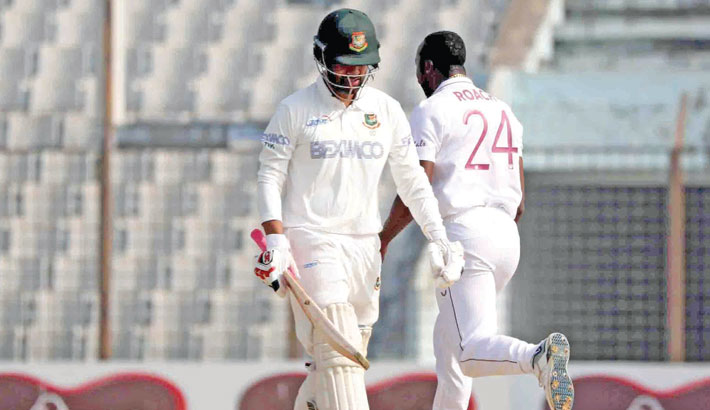 Bangladesh opener Tamim Iqbal continues his struggle against West Indies pace bowler Kemar Roach as on Wednesday he fell prey to him for the 11th time across all formats.

The right-arm pacer bowled him to bring the first breakthrough for the visitors after Tigers decided to bat in the series opener at the Zahur Ahmed Chowdhury Stadium in Chattogram.

It seems Tamim has no clue how to answer the pacer as Roach’s round-the-wicket delivery has done the trick for the left-hander for many times in the recent past that includes knocking his bails off or trapping the batsmen in front.

Sometimes his deliveries kissed Tamim’s bat that ended up giving a catch to the wicketkeeper.

Tamim lost his wicket to Roach for seven times in ODIs while he got dismissed for four times in Tests during the past years.

Pacers used to start the bowling from over-the-wicket and eventually changed the angle if bowling for a long period doesn’t pay him success but now it seems they are opting for other options.

Andrew Flintoff was the pioneer of this strategy as he started bowling from round-the-wicket during the 2005 Ashes series and the southpaw Adam Gilchrist was very uncomfortable facing him throughout the series.

Since then, Test seamers attempted the strategy to the left-handers and in the last five years, it had started to award the pacers with ample successes in Tests.

During the last five years, 40% of right-arm pacers bowled round-the-wicket to the batsmen as only 21% of pacers used this strategy during the last ten years.

The bowlers took 27% of the wickets coming from round-the-wicket during the last five years, as the percentage is 37% from over-the-wicket.

In the past ten years, bowling from round-the-wicket dug 38% wickets, and from over-the-wicket, the percentage is 37%.

The left-handed batsmen usually don’t prefer to play right-arm pacers coming from round-the-wicket, as Kemar Roach intentionally does that whenever he bowls to a left-hander with the new ball.

Roach angles the ball into the left-handers as it swings away towards the off-stump and eventually compliments Roach with wickets and Tamim is falling to it again and again.

“As for the delivery which got Tamim, the ball came to the stumps and it swung in. He had to play it as he didn’t have the option of leaving it and for the doubt of it chipping an edge.

“That is the sole reason for bowlers like James Anderson, Stuart Broad or Kemar Roach, who depend highly on in-swingers, they always tend to bowl to the left-handers from round-the-wicket,”  explained the former southpaw.