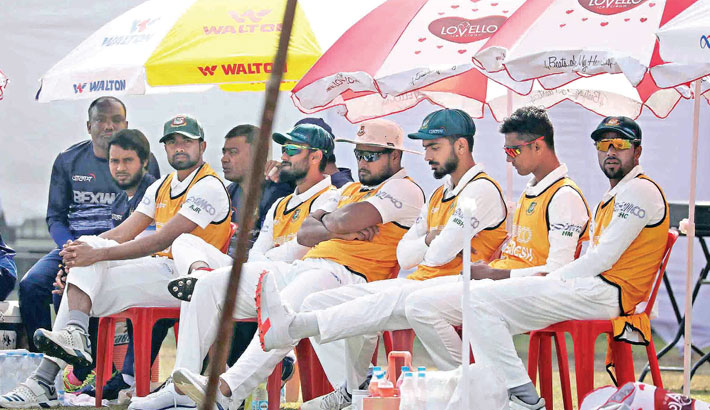 The benched Bangladeshi players are seen watching the first day’s play against West Indies during the first of two-Test series at the Zahur Ahmed Chowdhury Stadium on Wednesday. —BCB photo

Bangladesh continued to stick with their defensive mentality as they played with only one pace bowler against West Indies in the opening Test of two-match series at the Zahur Ahmed Chowdhury Stadium in Chattogram on Wednesday.

It was a surprising move given that in their previous Test in Chattogram, in 2019 against Afghanistan, they had opted for an all-spin attack which did not pay-off as they were outplayed by the visitors in that Test.

However, the way everything panned out after the Test series and if the last Test against Zimbabwe was taken into consideration where Tigers had opted for two pace bowlers in their playing XI, it seemed that there was a possibility that Test specialist Abu Jayed would have the chance to share the new ball with Mustafizur.

Mustafizur, who was axed from the Test contracts where both Jayed and Ebadat are included,  has improved a lot in the recent past by rediscovering his form and with his latest addition - bringing the ball back into the right-handed batsman, it looked certain that he will have an edge over Ebadat.

Bangladesh head coach Russell Domingo also had insisted during their tour of India that the country's cricket culture needed a paradigm shift, relying on its pacers to win Test matches even at home like the way their other Asian neighbours now operate.

Tigers are yet to develop such a pace battery. In the home conditions, they have relied on their spin attack to bowl out the opposition teams but as they are expected to play Tests abroad in coming days, it seemed it might be the new dawn for their pace attack.

However, to everyone's utter surprise the hosts once again adopted the perennial formula of forming a spin-oriented team, ignoring the seamers and Jayed became the latest scapegoat.

The last time Bangladesh played a Test match, in February last year against Zimbabwe in Dhaka, their spinners were chief destroyers picking up 15 wickets but Jayed, one of the two pacers along with Ebadat, got a four-for in the first innings.

Tigers played fewer Test matches than other teams and a player like Jayed, who is regarded as Test specialist, got even fewer chances and once again he faced the curse of being a fast bowler.

For another time, it is proved that the aspiring young Bangladeshis should not dream to become the fast bowler, the neglected stepsons of the country's cricket.

Preparing a slow-low pitch, deploying as many spin bowlers as possible against the non-sub-continent sides remained as the most potent formula for winning Test matches for Bangladesh at their backyard.

The formula was heavily implied by India during the early ’90s when they became a formidable force at home but used to meekly surrender at faster, livelier pitches against the pacers abroad.

Former game development manager Nazmul Abedin said that the move is surely disappointing considering it gives a wrong message to the pacers as well as spinners.

“Look if we can’t show courage against Windies playing two pace bowlers in the Test then with whom are you expecting to do it at home?” Nazmul told The Daily Sun.

“Firstly it is very disheartening for the pace bowlers and Jayed, in particular, considering he was doing well and was expected to be our best pace bowler and the second thing is that the spinners don’t have a competition among themselves.

“We can win the Test match but that does not solve the problem because if you want to be a successful Test squad you are expected to do well both at home and abroad and we are certainly not making the right move,” he added.