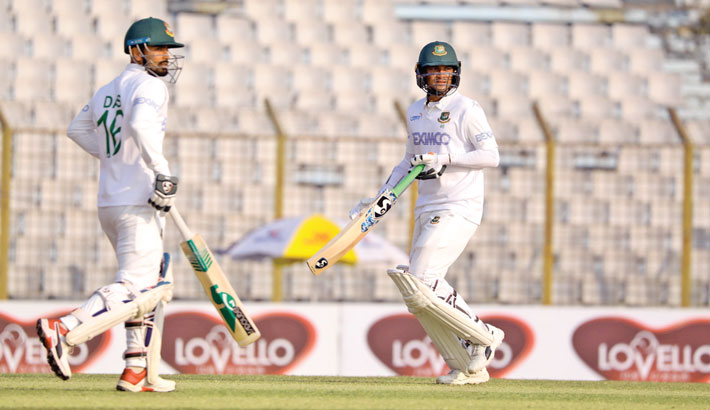 Bangladesh batsmen Liton Das, left and Shakib Al Hasan run between the wicket during the opening day of the first of two-Test series against West Indies at the Zahur Ahmed Chowdhury Stadium in Chattogram on Wednesday. —BCB photo

Bangladesh posted 242 for five against West Indies in the opening day of the opening Test as Shakib Al Hasan and Liton Das managed to finish the day with a decent score on board at the Zahur Ahmed Chowdhury Stadium in Chattogram on Wednesday.

The return day to Test cricket for Bangladesh after the forced COVID-19 pandemic break for almost a year did not have complete satisfaction as they failed to take control over the visiting West Indies in the first day of their first Test of the two-match series.

After winning the toss skipper, Mominul Haque elected to bat first and apart from Tamim Iqbal, every other batsman reached at least 25 but only Shadman Islam could get past 50 while Shakib and Liton remained unbeaten respectively on 39 and 34 runs.

Roach and his new ball partner Shannon Gabriel, two most experienced bowlers in the side, failed to exert pressure on the opponents but the former came with a breakthrough when one of his in-swingers went through the gate of Tamim’s bat and pad to disturb the timbers.

After the departure of Tamim, who scored just nine leaving the side on 23-1, two young batsmen - Saif and Najmul Hossain seemed to bat with ease until the latter was dismissed by a disastrous misunderstanding after making 25.

Skipper Mominul joined Shadman and though they added 53 runs, the former hardly looked comfortable and eventually left-arm spinner Jomel Warrican got his reward of bowling tight as he played a lofted shot on a tossed up delivery to the safe hands of John Cambell at mid-wicket.

Shadman stood tall against the West Indies as he made a patient half-century with six boundaries but he departed rather unfortunately due to the umpire's wrong decision.

The opener had to return to the pavilion though he could have called for a review but didn't as Mushfiqur Rahim told him not to go for it.

“I thought the ball was on line so I did not take the review. I felt the ball would hit the wicket. Certainly it's disappointing after coming back to the dressing room but this is part of life and I have to accept it,” Shadman said.

Mushfiq, who scored 38 from 69 balls, was dismissed casually when he edged a rather innocuous looking straight one of Warrican for a low catch of Cornwall at first slip.

“It was a very important session and time of the game. We needed the wicket before the new ball and to get a wicket (Mushfiqur) at that time was very crucial,” said Warrican, who bagged 3-58 for the visiting side.