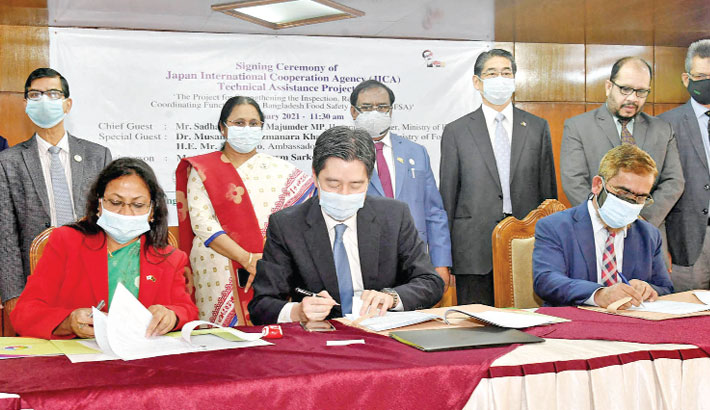 Awami League promised to ensure safe and nutritious food in its election manifesto, the minister said this while speaking as the chief guest at the signing ceremony of technical assistance project between Japan International Cooperation Agency (JICA) and Bangladesh Food Safety Authority (BFSA) on Wednesday.

The project is aimed at strengthening inspection, regulatory and coordinating function of the BFSA.

The minister said, “Food Safety Act of 2013 was enacted and Bangladesh Food Safety Authority (BFSA) was established to ensure food safety during the rule of the AL government. This has been made possible under the leadership of Prime Minister Sheikh Hasina.

“The BFSA will be given charge of supervising food safety. There is no alternative but to equip BFSA with skilled manpower, technical knowledge, capacity building and training to ensure food safety.”

Japan has been playing an important role in the country’s development since the beginning of its independence, said the minister adding that there has been a strong and friendly relationship between the two countries.

Md. Abdul Kayowm Sarker, Chairman of BFSA, and Yuho Hayakawa on behalf of JICA signed the record of discussion on the technical assistance project at the Bijoy 71 Hall at Probashi Kallyan Bhaban in Eskaton of the capital.

Food Secretary Dr. Mosammat Nazmanara Khanum and Japanese ambassador in Dhaka Naoki Ito was the special guest at the programme.