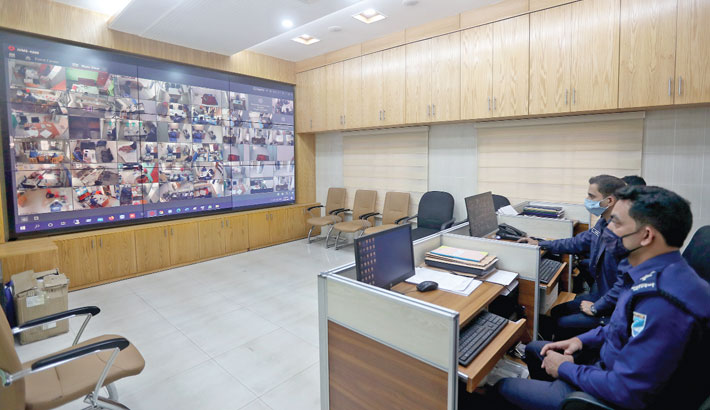 As part of 24-hour remote monitoring management system, policemen are monitoring the activities of 96 police stations in 13 districts staying at Dhaka range DIG office. The photo was taken on Wednesday. —Reaz Ahmed Sumon

Bangladesh Police has recently introduced a remote monitoring management system at 96 police stations in 13 districts of Dhaka Range to monitor the activities of the police stations.

Night vision colour IP cameras have been installed in the duty officers’ rooms, sentry duty-posts and custody to bring the police stations under a 24-hour monitoring system.

The main activities of the police stations revolve around these three places. Allegations of irregularities, corruption, mismanagement and negligence of duty have been centered on these places for a long time.

But now there is no such opportunity.

The Operations Control and Monitoring Centre have been set up at the Dhaka Range DIG’s office in the capital to bring the police stations under the monitoring system.

Jehadul Kabir, additional DIG (crime) of Dhaka Range, told the Daily Sun, “The cameras have a zoom capacity. This allows the image or video to be enlarged. We can see the surroundings by turning the camera 180 degrees.”

“The 30-day video record of each police station will be kept in the Operations Control and Monitoring Centre,” he added.

Officials said the police personnel on duty at the gate of the police stations were accused of neglecting their duties and giving special benefits to the accused or their relatives.

Footage from these cameras can be seen directly from the Operations Control and Monitoring Centre. From there, the Range DIG’s office can see the surroundings by turning the camera 180 degrees.

Whenever there is any inconsistency in the activities of any police station, screenshots will be taken. Centre officials are talking live with policemen and service seekers concerned through cameras.

While the officers working at the centre were talking and watching live video, police members of the police stations could not see any video footage.

So, in many cases the policemen concerned are surprised when they are talking from the range office seeing any inconsistency.

During the office hours, the inspector (Operations and Control) will be in charge of the control room. Officers above the rank of inspector of Police of the Range Office will supervise the activities on the instructions. Urgent information must be communicated directly with the Range DIG.

Since September 2019, the police stations under Dhaka Range have been brought under strict monitoring.

Plaintiffs are called by high-ranking police officers after general diaries are filed. They are asked about bribery and harassment.

At the beginning of the monitoring, various allegations were found to be true.

But, now they are coming down. There are no allegations of taking money or harassment in filing cases and GDs.