Tigers need to get over Cornwall syndrome 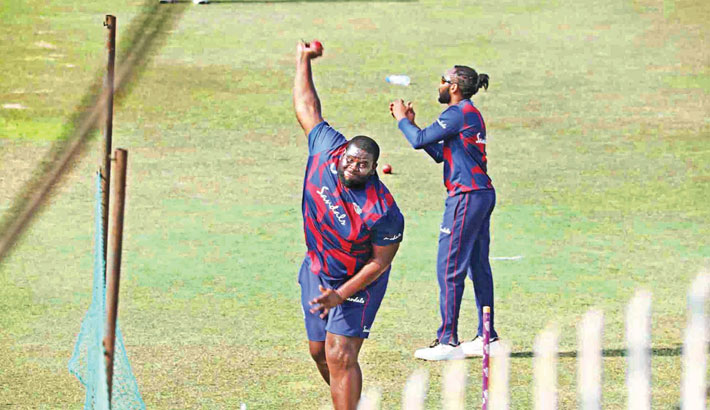 Bangladeshi cricketers are known to be intimidated by a particular opponent ahead of any international series if the individual makes a statement through his performance.

If the previous record is taken into consideration, West Indies off-spinner Rahkeem Cornwall is certainly making lose their sleep as he single-handedly put BCB XI under pressure in the practice game with his five-wicket haul.

Cornwall, who turned out to hog all spotlight since arriving in Bangladesh, certainly can trouble the opponent through his vicious turn and more importantly with his consistent line and length.

No one knows it better than Akbar Ali considering he had been on the receiving end in the practice game as he was bowled by Cornwall’s vicious turn.

“He can turn the ball and in my case, it was a sharp turn that bamboozled me,” Akbar told The Daily Sun on Tuesday.

“He is quite tall and gets an extra bounce and that is the sole reason he picked the wickets of two of our batsmen. But the main thing is that he can bowl consistently in one length and as we are not used playing spin from that length so he is quite difficult to negate,” he added.

West Indies Test skipper Kraigg Brathwaite expressed his confidence that Cornwall will perform well in this condition considering he is expected to have the wickets favourable for slow bowlers.

“I was very impressed. He bowled well, created a lot of pressure with dot balls. I know Rakheem’s ability. I knew he was always a quality off-spinner. It is good to see him in these conditions. I know he will do well in this Test.”

Bangladesh Test skipper Mominul Haque said that they have already made plans for the off-spinner.

“We have a plan for him (Cornwall) and we are confident that we can do well against him,” he said.