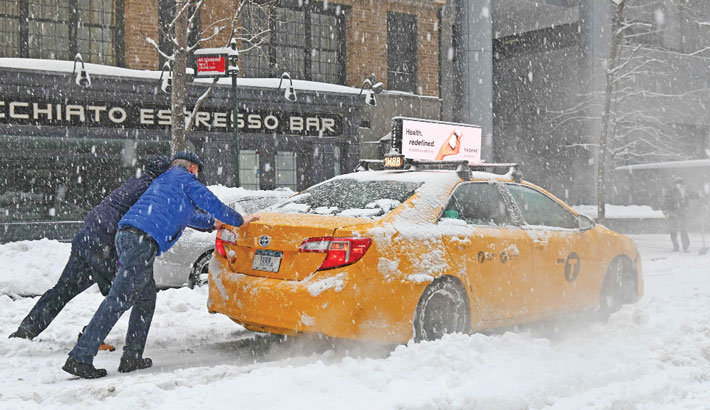 NEW YORK: A huge snowstorm has brought chaos to the United States’ east coast, shuttering airports, closing schools and forcing the postponement of coronavirus vaccinations into Tuesday morning as New York City steeled itself for possibly one of its heaviest ever snowfalls, reports AFP.

The National Weather Service (NWS) issued storm warnings from Virginia to Maine—home to tens of millions of people—as heavy snow mixed with wind gusts up to 50 miles (80 kilometers) per hour spurred blizzards along the eastern seaboard.

New York declared a state of emergency restricting non-essential travel, moved all children back to remote learning and rescheduled long-awaited vaccine shots as some parts of the city were hit by more than 18 inches (1.5 feet) of snow.

CNN meteorologists said that figure could reach two feet before the storm comes to an end. “The storm is still developing. It’s still intensifying. It’s a massive storm,” one said, with the broadcaster reporting the extreme weather could continue into Wednesday.

Salt trucks and snowplows moved out across New York’s streets, already quieter than usual due to Covid-19, as Mayor Bill de Blasio announced that the few children who had returned to classrooms would also stay at home on Tuesday.

“There will be locusts, next, at the rate we’re going,” he quipped on MSNBC.

More than 1,600 US flights were canceled—mostly at airports in New York, Boston, Philadelphia and Washington—disrupting travel that has already been heavily curtailed by the pandemic.

Airlines canceled all flights in and out of LaGuardia and JFK airports, while 71 percent of flights were scrapped at Newark Liberty Airport.

Covid-19 vaccinations for New York City were also to be halted on Tuesday.

By 7:00 pm Monday, 16.3 inches of snow had been recorded in Central Park, according to the NWS. Snowfall was expected to continue into Tuesday morning, with forecasters predicting 20 inches in total before the storm moves northeast through New England.

“This is expected to be one of the bigger snowfall events for New York City,” Matthew Wunsch, an NWS forecaster, told AFP.

The most snowfall to have blanketed America’s commercial capital was 27.5 inches, over three days, in January 2016.

In Washington, where snow and ice had formed since Sunday, President Joe Biden postponed a scheduled visit to the State Department due to the conditions.

The capital has postponed a planned Tuesday return to school for tens of thousands of children who have been learning at home for almost a year because of the pandemic, local television networks reported.

“This storm is going to get worse before it gets better,” tweeted Governor Phil Murphy, adding that six vaccination mega-sites in the state would remain closed Tuesday.