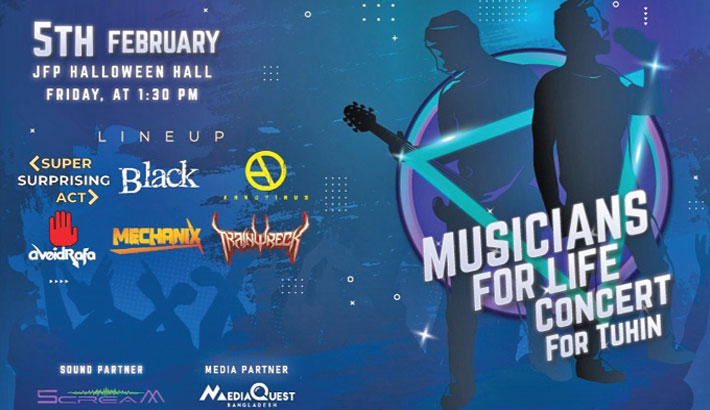 ‘Musicians for Humanity’, an organisation of the country’s popular music bands, will organise a charity concert titled ‘Musician for Life’ to raise funds for the treatment of Tuhin, a coordinator of ‘Hearts Relation Band’ (HRB) on Friday (February 5).

Tuhin has been suffering from anemia for the last one and a half months. He needs immunoglobulin/IVIG which is worth Tk2 lakh per dose. In the initial stage, he needs five doses and later it will require five more doses according to his health condition. It requires a total of 20 lakh taka. Some bands of the country are going to arrange the charity concert to raise funds for his treatment, said a press release.

The line-up of the concert is ‘Super Surprise Act’, ‘Black’, ‘Arbovirus’, ‘Avoid Rafa’, ‘Mechanix’ and ‘Trainwreck’.

Convener of Musician for Life and Vocalist of Mechanix Aftabuzzaman Tridib said the main purpose of the charitable organisation-Musician for Life- is to give a hand to the musicians of the country in their rainy days.

The concert will be held at Halloween Hall of Jamuna Future Park in the capital Bashundhara Residential Area at 01:30pm.

The journey of ‘Musicians for Humanity’ started with the initiative of some popular bands of our country and their main purpose is to stand by the people humanely and socially. Following this, they have come forward for Shahadat Parvez Tuhin, the co-ordinator of the band ‘Heart Relations (HRB)’, a dedicated soul of the band music industry with the live concert.