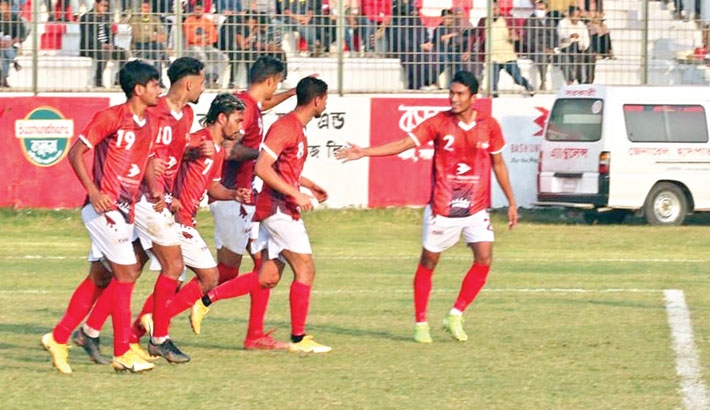 Bashundhara Kings continued their dominance in the ongoing Bangladesh Premier League as they crushed Mohammedan Sporting Club Limited 4-1 in their home match at the Shaheed Dhirendranath Dutta Stadium in Cumilla on Monday.

Kings now won all their 10 matches in the ongoing season including five matches of Federation Cup.

The holders also took sweet revenge of their 0-1 goal defeat against Mohammedan at the same venue last year.

Kings now have 15 points from five matches while Mohammedan remained with their previous credit of five points in as many games.

Raul netted the first goal for Kings with a header utilising a cross from Jonathan in the ninth minute (1-0). Mohammedan took no time to equalise the margin as Nurat scored with a right-footer from the danger zone in the 22nd minute (1-1).

Robson doubled the margin with an eye-catching chip shot in the 45th minute (2-1) and Bashundhara finished the first half with a 2-1 lead.

Jonathan scored the third goal with a right-footer off a short pass from defender Bishwanath Ghosh in the 50th minute (3-1). In the 80th minute, Kings got another chance to extend their margin when Mohammedan’s Jafor Iqbal illegally pushed Jonathan inside the box in the 80th minute.

Referee Bitu Raj Barua awarded Kings a penalty and Raul converted the spot-kick to complete a big win for the hosts (4-1).