Amanda Gorman: The Hill We Climb 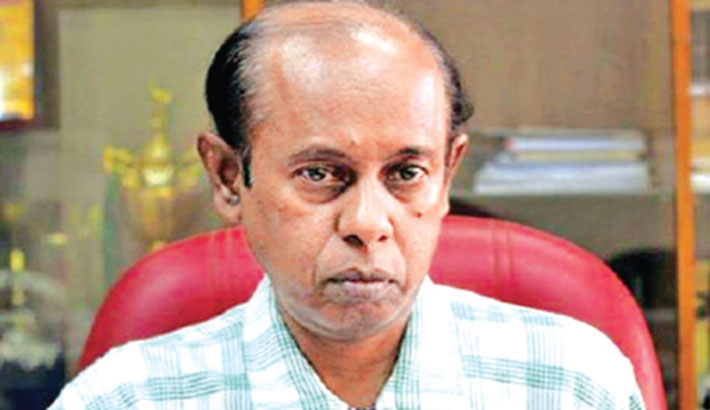 and the norms and notions of what “just” is isn’t always justice.

And yet, the dawn is ours before we knew it.

If we’re to live up to our own time,

then victory won’t lie in the blade,

but in all the bridges we’ve made.

That is the promise to glade,

the hill we climb, if only we dare.

These are few lines from The Hill We Climb by Amanda Gorman, a girl of 22. She read out this poem at the coronation of newly elected American president Joe Biden held on 20th January. Putting a huge question mark on White House and after the worst attack at the direct provocation of departed president Donald Trump, Amanda expected her poem would motivate people towards something good, would help Americans to be united from the coronation ceremony. This poem reflects the story of her slave forefathers. She frequently reminded of that famous line of Audrey Lord – “Poetry is not a luxury.” Her teachers and advisors were not at all surprised to see her as the youngest inaugural poet.

From teen age Amanda loved poetry and dreamt of being a writer. While reciting her poem In This Place: An American Lyric at Library of Congress in 2017 she was noticed by Jil Biden and at the last moment she was called for composing an original poem for the coronation. Inspiration for regaining Americans’ confidence on politics after riot was decided as subject matter. For a girl of only 22 it was a matter of tremendous pressure to compose such a poem within so short a time but Amanda honoured the organisers. About herself she said, “I can’t say that I am better than others but I must say that Biden couple has selected me for a great purpose. I shall give my best for it.”

In the question of unity her poem came out successful. She added, “An easily intelligible language for mass people will show hope for all. I wanted to highlight their well being. I noticed the language of Abraham Lincoln, Frederick Douglas or Martin Luther King. Language selection was very important for me.” Elizabeth and Richard advised me, “As an inauguration poet your experience must be different from others. Americans are facing various pressures. It appears to me tough like climbing a hill. It is certainly a big opportunity to unite people and invoke a beautiful future. This is very much required now to march forward with all.”

When Amanda was finally selected only half of the poem was written. Just then demonstrators protested at Capitol Hill on 6th January. Including that incident she completed her poem at that night. 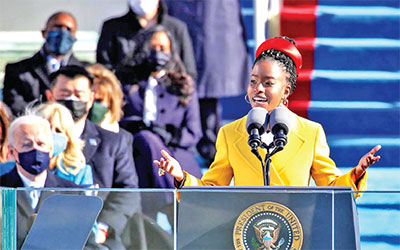 Renowned fashion designer Muchia Prada designed her programme dress. Prada commented, “As successor of poet Maya Angelou and Elizabeth Alexander at coronation of Bill Clinton and Barack Obama in 1993 and 2009 Amanda has tried her best to sow respect to her predecessors;” Renowned jewellery designer Nicos Kullis designed a gold earring for her.

Referring particularly to her age Amanda has said, “Prior to me youngest coronation poet was Richard Blanco, 44. Youths of my age remain mainly depressed. I feel proud of getting this opportunity to deliver a message to them that they also have something to say.”

At childhood Amanda faced problem to pronounce the letter ‘r’. She used to say that girls can change the world but could not utter all the letters properly. So, she had to choose another line which doesn’t contain ‘r’. In spite of pronunciation problem that little girl is now world famous. Just for performing her works properly she became the centre of attraction of the coronation.

Born in Los Angeles, Amanda was always inspired to write by her mother, an English teacher. With keen sense of life Amanda was a good orator and interested in reading and writing from childhood. She said,” I never care about my infirmities. If you teach yourself how to speak, if you are careful about pronunciation and phonetics, you will never be in trouble.”

While writing poems, Amanda thought of her grandfather and grandmother first followed by parents and many other children. She tried to realise others’ feelings in her own way. Her words, “Before writing I visualise a group of Americans sitting in my room. I try to include them in my poems as far as possible and to be united with them. If I always repent and feel tired then how can I work with them?”

From school at Santa Monica she learnt how to do own works. She got Milken Family Foundation Scholarship and studied Sociology in Harvard University. Her entry into the world of poetry is not long. For the first time, she submitted her poems in a local competition in 2014 and was selected as first young poet laureate of Los Angeles. After three years she was nominated as Youth Poet Laureate of Los Angeles. She completed graduation in 2020. About her a former associate professor of Harvard University said, “It is a good beginning for entering into politics. I had the opportunity to suggest her. She never frustrated me. She is a very talented poet. She has gained much at young age but this is just the beginning.”

Amanda acquired National Youth Poet Laureate title as recognition of her works on oppression, feminism, racism and marginalisation. Her book The One For Whom Food Is Not Enough was published in 2015. She was invited from Obama’s White House and performed with him, Manuel Miranda, Hillary Clinton, Malala Yusufjai and many others. She read out poems in a programme CBS This Morning, participated in many functions outside America and worked with MTV on poetry.

Amanda’s gains include College Women of the Year by Glamour magazine, Genius Grant by Aussie Media, Webby Award etc. She helped in writing Black History Month (honour to black athletes) by Nike in 2020, wrote two books for children. She worked on Change Sing, a pictorial book. Her comment was, “Everybody has opportunity to change with own power.” Just at 22 Amanda is a bright exception. It is a matter of speculation whether this record will be broken at all but certainly she will cross more hills.