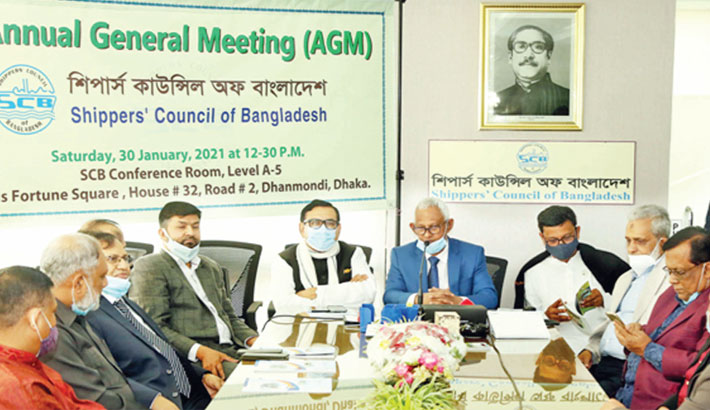 Shippers’ Council of Bangladesh (SCB) Chairman Md Rezaul Karim presides over the 39 Annual General Meeting (AGM) of the organisation at SCB conference room at Dhanmondi in the capital on Saturday. State Minister for Shipping Khalid Mahmud Chowdhury and former Shipping Minister Shajahan Khan were present in the AGM.

Shippers’ Council of Bangladesh (SCB) organised the 39 Annual General Meeting (AGM) of the organisation at its conference room at Dhanmondi in the capital on Saturday.

The AGM reviewed country’s trade, transport, shipping and port related problems in the context of COVID-19. It also reviewed the performances of the council during the last one year which include measures taken for enhancing its services to the shippers i.e. exporters and importers. The meeting also discussed the interaction with Asian Shippers’ Alliance (ASA) and Global Shippers’ Alliance (GSA).

The meeting unanimously confirmed the minutes of the last AGM, approved the Annual Report-2020, the Audited Balance Sheet and Statement of Accounts for the year 2019-2020 and appointed an auditor for the year 2020-2021.