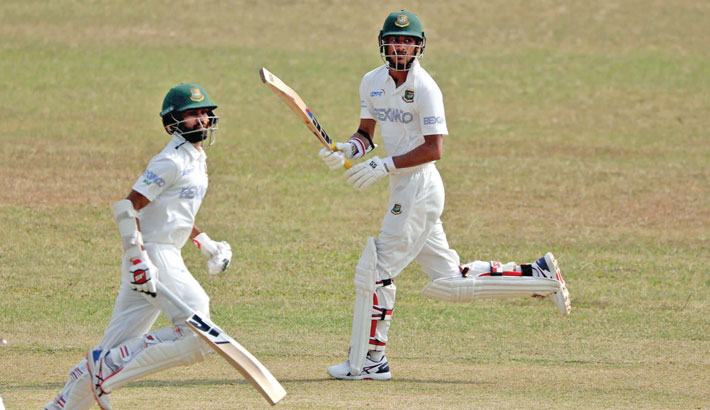 Bangladesh Cricket Board XI batsmen Shadman Islam, left, and Mohammad Naim run between the wickets during the second day of their three-day practice match against West Indians at the M A Aziz Stadium in Chattogram on Saturday. – BCB PHOTO

Off-spinner Rahkeem Cornwall gave Bangladesh a reality check before the first Test as he bagged a five-for against Bangladesh Cricket Board XI and took West Indians in the driving seat in the second day of a three-day practice match in Chattogram on Saturday.

Cornwall finished with 5-47 while left-arm spinner Jomel Warrican took 3-25 as BCB XI were bundled out for just 160 runs in 47.4 overs in their first innings, replying to the visitors’ score of 257 runs at the M A Aziz Stadium.

West Indians, who managed a 97-run first-innings lead, finished the second day’s play with 179-5, taking a healthy 276 runs lead over BCB XI with Nkrumah Bonner and John Campbell made 80 not out and 68 runs respectively. 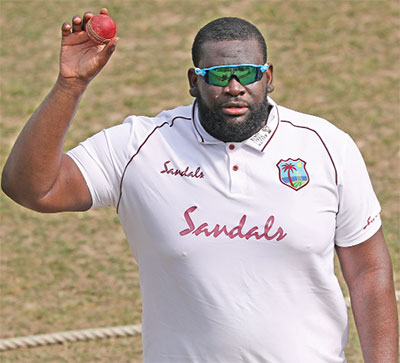 BCB XI, who resumed their overnight score of 24-0, lost opener Saif Hassan in the first over of the second day’s play without adding any score on board as pacer Kemar Roach trapped him leg-before for 15.

Mohammad Naim and Shadman Islam put up a decent 74-run stand for the second wicket before the Naim became the first victim of Cornwall after making an attacking 45 off 48 balls.

“I just kept it simple and put the ball in the right areas and tried to be consistent for a long period,” said Cornwall.

“I think it is going to be a similar situation in the Test match that starts next week. So it is good to practice on something that you will get in the game. You can get your plans set on everything for the Test match,” he added.

Shadman followed him in the next over after making patient innings of 22 off 82 balls and BCB XI innings crumbled against the West Indian bowling-attack as they lost their remaining seven wickets for just 60 runs.

BCB XI skipper Nurul Hasan made second highest 30 runs for his side.

Despite losing opener Shayne Moseley in their first over in the second innings, West Indian batsmen - Bonner and Campbell made a 129-run stand for the second wicket to take full control in the game.

Saif (2-32) broke the partnership by removing Campbell and West Indians lost three more wickets in the final session but they finished the day on top, something that was much-needed to boost up their confidence before the first Test on February 3-7 at the Zahur Ahmed Chowdhury Stadium.

“It will be (good preparations for the Test match). It is a similar wicket. It is keeping low and the ball is spinning. I think it is good practice ahead of the Test match,” said Bonner.