The dream bridge will bring about a sea change 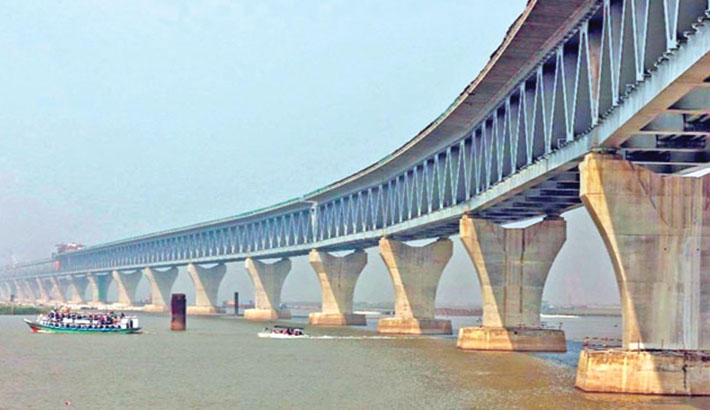 Padma Bridge is a multi-purpose road and railway bridge under construction on the Padma River in Bangladesh. This bridge will connect Louhojong, Munshiganj with Shariatpur and Madaripur. This will connect the South-Western part of the country with the North-Eastern part.

The entire design of the Padma Bridge was formed by a team of international and national consultants led by ACOM. The cost of the construction of the bridge is Tk 30,893.39 crore. The project will cover three districts.

This is one of the most challenging construction projects for a developing country like Bangladesh. In the Padma-Brahmaputra-Meghna basin, 41 spans of 150 meters in length, 7.150 kilometers in length and 18.10 meters in width are being planned for the largest bridge in the country. The work of laying 41 spans of the bridge has already been completed and the entire part of the bridge will be visible from now on.

The Padma Bridge will connect the south-western part of the country directly with the center of the country through a specific route - the Mawa-Jajira point. The bridge will make a significant contribution to the social, economic and industrial development of the relatively underdeveloped areas of the country. It will directly benefit more than 30 million people in an area of about 44,000 sq km or 29 per cent of the total area of Bangladesh. As a result, the project is being considered as a very important infrastructure for the country's transport network and regional economic development. The bridge has facilities for further expansion of gas, power lines and fiber optic cables. Moreover, once the bridge is built, the country's GDP will increase by 1.2 per cent.

The Padma Bridge, the dream of the people of the country, is coming up with its head held high. The dream is almost true now, with all the spans of the bridge having been laid and the entire Padma Bridge of 6.150 km being visible. The biggest bridge in the history of the country is being built, the long cherished dream of the people is being fulfilled, and our Bangladesh is moving forward towards a bright future.