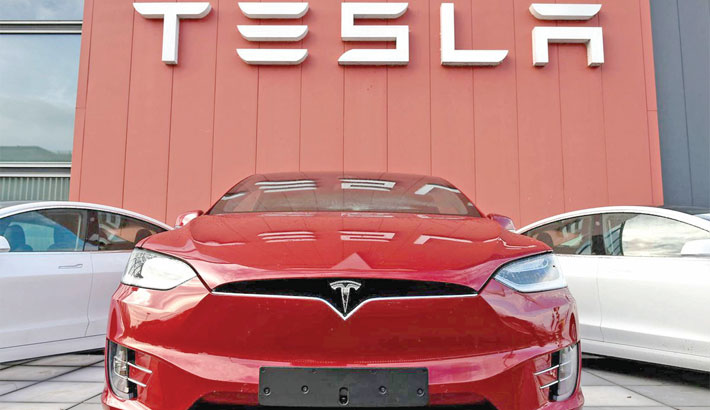 NEW YORK: Electric vehicle stocks have been on fire this past year, outperforming every other sector in the market.

The sector’s favorite benchmark—Global X Autonomous & Electric Vehicles ETF (DRIV)--has climbed 75.3 per cent over the past 12 months and is already up 13.6 per cent YTD, managing to even outperform the red-hot biotech sector as the Covid-19 vaccine rollout gets underway, report agencies.

Incredibly, EV and clean energy have continued to post impressive growth numbers amid the ongoing pandemic.

Indeed, the latest report by clean energy watchdog Bloomberg New Energy Finance (BNEF) has revealed that investments in renewable energy capacity came to $303.5 billion, up 2 per cent on the year, thanks mainly to the biggest-ever build-out of solar projects as well as a $50 billion surge for offshore wind.

The EV sector has emerged on top, with investments in the burgeoning industry including charging infrastructure buildout clocking in at $139 billion, good for a 28 per cent Y/Y increase, while the passenger EV market reached an estimated $118 billion representing a four-fold growth compared to 2016 levels.

EV-focused ride-sharing could also be poised for stardom, with Uber (NYSE:UBER) and Lyft (NASDAQ:LYFT) both pledging 100 per cent EVs by 2030, and Canadian “Silicon Valley” darling Facedrive (TSXV:FD,OTC: FDVRF), pioneering carbon-offset ride-sharing back in 2019 and moving quickly to expand its North American footprint with a stunning acquisition of Washington D.C.-based Steer, the EV subscription  company that plans to change the way we view both EVs and car ownership.

Millennials, a generation that holds massive consumer power, is now beginning to dictate what happens next with the auto industry. And while the global pandemic and a major shift to remote work has brought them back into the car “ownership” market—they don’t want to own the same way their predecessors did. Numerous studies have shown they value “access” to a private car over ownership, and they want it on-demand in a process that is as easy as the click of a button. And they overwhelmingly value EVs over conventional cars.

That’s Steer: It’s the digitally seamless way to have your own virtual gallery of the best EVs on the market, with no insurance costs, no hassle, whenever you want, wherever you. It’s like one new way to “own” a car (or cars, in this case).

That could be one of the reasons why Facedrive stock is up over 110 per cent in less than a month:

This company knows Millennials inside and out, and it’s capturing them in advance. We think demand for this innovative and transformative EV subscription service stands to increase substantially in the coming months and years as our world undergoes one of the biggest lifestyle transformations in centuries.

With president Joe Biden now in the driving seat and the Democrats in control of both branches of Congress and the White House for the first time since the first two years of Barack Obama’s first term, EV companies could be some of the biggest beneficiaries of Biden’s $2 trillion climate plan.

After all, Biden has pledged to install 500,000 charging stations, a number that analysts believe could spur sales of 25 million EVs, or 25x what Tesla Inc. (NASDAQ:TSLA) expects to sell in 2021.

That’s not just a huge boost for EV manufacturers … it extends to the charging innovators, and particularly to the ride-sharing platforms, not to mention EV subscriptions that fully intend to gain significant ‘conventional’ converts.

Legacy automakers understand this is an unstoppable trend and many such as General Motors (NYSE:GM), BMW (OTCPK:BMWYY), Volkswagen (OTCPK:VLKAF) and Nissan Group (OTCPK:NSANY) have launched their EV brands, while smartphone titan Apple Inc.(NASDAQ:AAPL) is seriously considering making a comeback to the EV space after shelving the Apple Car project several years ago.

They say that a rising tide lifts all boats, and buying a fund like DRIV can give you broad exposure to the EV space. Still, some EV names are likely to remain ahead of the pack. In the meantime, amid all the traction in this section, the EV wars are intensifying exponentially, and while Tesla is the obvious front-runner, there are a number of ways to ride the tailwinds of our transportation transformation that have a lot more upside.