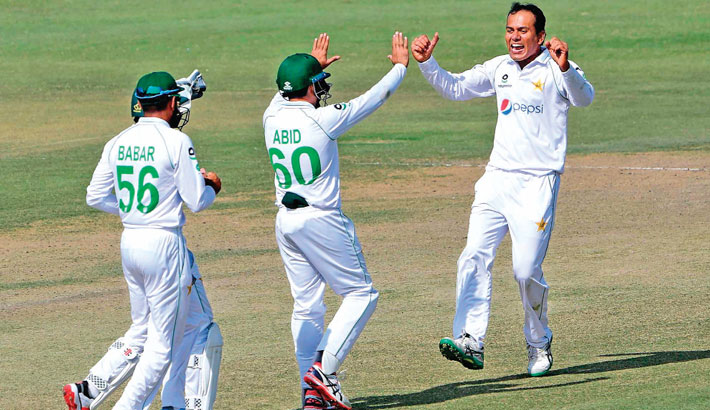 Pakistan spinner Nauman Ali, right, celebrates with teammates after taking the wicket of South Africa pacer Anrich Nortje (not pictured) during the fourth day of the first Test at National Stadium in Karachi on Friday. —AFP photo

Debutant Nauman Ali took five wickets and fellow spinner Yasir Shah grabbed four to give Pakistan a seven-wicket victory in the first Test against South Africa in Karachi on Friday.

Nauman finished with 5-35 and Yasir took 4-79 as South Africa slumped to 245 all out in their second innings on the fourth day on a wearing National Stadium pitch that favoured spin bowlers.

Pakistan, needing 88 for victory, lost openers Abid Ali, Imran Butt and Babar Azam for a total of 52 runs before achieving the target in 22.5 overs to take a 1-0 lead in the two-match series.

The second Test starts on February 4 in Rawalpindi.

Azhar Ali was 31 not out while Fawad Alam -- who hit a fighting hundred in the first innings -- hit the winning boundary.

It was only Pakistan's fifth victory against South Africa in 27 Tests. Anrich Nortje bowled Abid in the first over after lunch and then had Butt caught behind to finish with figures of 2-24.

Azam, on his Test captaincy debut, was dismissed leg before by Keshav Maharaj.

It was a spinners' battle on a brownish wicket, allowing Nauman to record figures of 7-73 and Yasir 7-133. In contrast, South Africa's spinners managed just four wickets. Pakistan had taken a crucial 158-run first innings lead, thanks to a fighting century from Fawad and half centuries from Faheem Ashraf and Azhar. South Africa are on their first tour of Pakistan for 14 years.