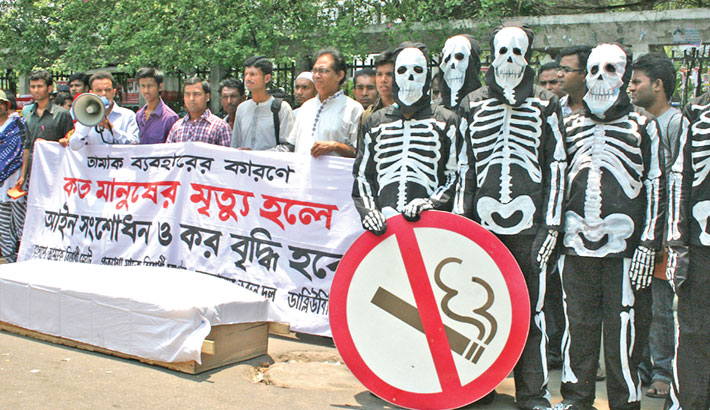 There is nothing new to prove that tobacco is a threat to public health. More than 1 lakh 26 thousand people die of various tobacco related diseases every year in Bangladesh — this individual information is probably enough to explain the catastrophes of tobacco. Apart from this, the health expenditure and productivity loss of tobacco related diseases is more than 30 thousand crore taka per year, Bangladesh Cancer Society, American Cancer Society, Cancer Research UK and Department of Economics of University of Dhaka found the facts in a joint study.

However, it is possible to prevent this huge number of deaths and financial losses by reducing tobacco use. Reducing tobacco use is even more urgent at this time of the current covid-19 pandemic. This is because, as has already been shown in various studies, use of tobacco increases the risk of covid and its complications.

Moreover, we have a legal obligation to control tobacco. Bangladesh was the first country to sign the WHO Framework Convention on Tobacco Control (FCTC) in 2004. Based on this, the Smoking and Tobacco Products Use (Control) Act was enacted in the country in 2005. Later in 2013 the law was amended and strengthened. This amendment has a positive impact on controlling tobacco in Bangladesh. The differences can be understood from the Global Adult Tobacco Survey (GATS) conducted in 2009 and 2017.

It shows that tobacco use decreased 18.5% (relative reduction) in 2017 compared to 2009. There was a 22% reduction in smoking and a 24% reduction in smokeless tobacco use. In other words, despite the increase in population in these eight years, the number of tobacco users has decreased by 3.5 million. Also, the rate of secondhand smoke in various public places has decreased by 30% in restaurants, 19% at work, 11% in hospitals and about 10% in public transport. While the rate of reduction in tobacco use is promising, this is not enough to implement Prime Minister Sheikh Hasina's announcement to make Bangladesh tobacco-free by 2040. In fact, the current tobacco control law is largely consistent with the FCTC, but there are still weaknesses in some areas. As a result, achieving the desired goal of tobacco control is being delayed.

The existing Smoking and Tobacco Products Use (Control) Act permits smoking in multi-carriage public transports such like trains, launches and in non-enclosed restaurants. As a result, secondhand smoke in public places at this time of the Covid-19 pandemic puts the public at greater risk. Again, the current law does not prohibit the display of tobacco products at the point of sales (POS). Bidi-cigarette packs are being displayed in shops as advertisements. Such tactical advertisements are making children and teenagers addicted to tobacco.

On the other hand, the law does not regulate emerging tobacco products like e-cigarettes, a new threat to teenagers and young people. Exploiting this scope, these addictive products are being spread all over the country and young people are becoming victims. Moreover, as the social responsibility program of tobacco companies is not prohibited by law, they can easily reach out to policy makers through 'social work'. At the same time, they strengthen their 'poison trade' under the guise of social service.

It is important to address these vulnerabilities by amending the existing Tobacco Control Act. Doing so will undoubtedly strengthen tobacco control in the country and reduce tobacco use. In particular, it is important to emphasise that no one is addicted to tobacco. According to a study, it is possible to make Bangladesh tobacco free by 2040 if no one is addicted to tobacco again and if 1.8 million tobacco users are prevented from consuming tobacco.