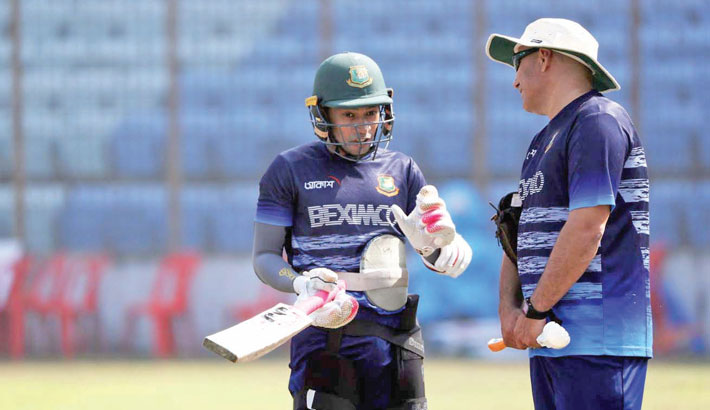 Bangladesh batsmen faced a barrage of bouncers in the Zahur Ahmed Chowdhury nets from their pacers and throwers as they began their preparation on Thursday after a day-break for the upcoming two-match Test series against West Indies.

After winning the three-match ODI series comfortably against the visitors, Tigers are now looking forward to the Test series, scheduled to start at Chattogram on February 3-7 while they will play the last Test in Dhaka on February 11-15.

Bangladesh will be eyeing to make sure that they wouldn’t receive the same embarrassment when they last played a Test in Chattogram in 2019 where Afghanistan handed them morale shattering 224-run defeat.

Bangladesh’s record in recent years also shows that the Tigers tend slipping Tests against the teams they should be dominating at home.

In 2018, Tigers lost to Zimbabwe, a lower-ranked team compared to them, by 151 runs and though they were favourites in the Test series. Tigers’ inconsistency at home in the longest format and long sabbatical from red-ball cricket could make the Test series a more competitive affair.

It seems head coach Russell Domingo is well aware that the Caribbean side would be eyeing to exploit their weakness against short balls considering they have experienced pace trio - Kemar Roach, Shannon Gabriel and Alzarri Joseph, enough arsenals to put them into trouble.

A granite slab was available in one net that was earlier used by former head coaches - Jamie Siddons and Chandika Hathurusingha ahead of tour down-under that was sufficient to prove that Tigers were wary that the visitors were going to put them into trouble with short deliveries.

While Test skipper Mominul Haque along with few others will have chances to be part of the practice match scheduled today between BCB XI and West Indies XI, it won’t be the same for other cricketers like Mushfiqur Rahim and Tamim Iqbal as they are expected to complete their preparation in the nets.

Though Tamim, Mushfiqur had the chance to play competitive cricket through playing in the ODIs against West Indies through which the international cricket resumed at home after a gap of 10 months, it won’t be the same case with Test specialist left-arm spinner Taijul Islam.

The left-arm spinner was part of the ODI squad but did not get a game to play while in the recent past, he did not feature in all the matches Bangabandhu T20 Cup that was regarded as the preparation platform for Tigers ahead of the ODIs.

However, Taijul feels that his long gap from cricket won’t have a huge impact considering he is continuously developing him through a rigorous training session.

“We are playing in our home ground after quite a while, so it’s not going to be easy. But I’ve been around the ODI team and have gone through continuous practising. So I believe I won’t have a problem making a comeback,” said Taijul.

“I don’t see much of a difference in not having matches for a long period, as having a strong mindset and continuous practice sessions have encouraged me to take the challenge.

“I’ve worked for my development like all my teammates, still, Test cricket is a different ball game, so I’m working hard to keep my place in the team. I’m looking forward to doing well with my variations,” he added.

Shakib did not take part in the practice as he was busy doing a scan for the groin injury that he received during the last game of the ODI series against West Indies.

“Having Shakib in the side is a big plus for all the spinners like myself, as he successfully reads the mindset of the batsmen and shares it with us. The spinners like me, Miraz (Mehidy Hasan) and Nayeem (Hasan) tend to have better performances with him being in our side,” he said.