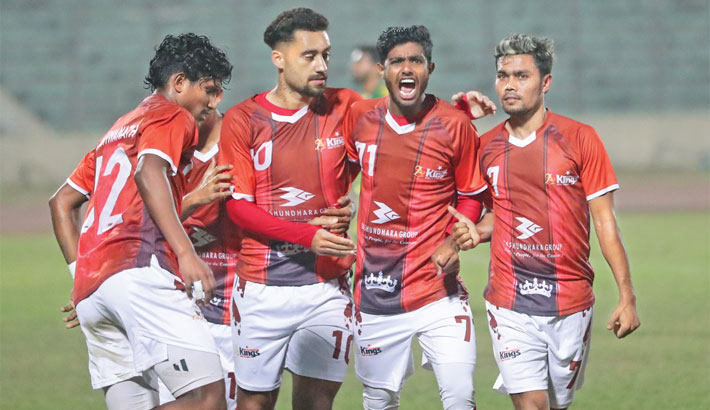 Bashundhara Kings players celebrate one of their three goals against Rahamatgonj MFS during their fourth Bangladesh Premier League match at the Bangabandhu National Stadium on Wednesday. —Reaz Ahmed Sumon

The defending champions Bashundhara Kings continued their winning streak after beating Rahamatgonj Muslim Friends Society by 3-0 goals in their fourth match of ongoing Bangladesh Premier League at the Bangabandhu National Stadium on Wednesday.

Kings are placed on top with 12 points with four wins from four matches while Rahamatgonj MFS remained with their previous credit of one point in the league.

Forward Robinho opened the account for Kings converting a penalty in the 34th minute (1-0).

Raul was immediately taken to the hospital.

Kings got another success just a few seconds before the half time after Rahamatgonj defender Kiron unluckily buried the ball into own net (2-0).

Sabuz sealed the fate of the match scoring the third goal for Kings, off a short pass from Brazilian midfielder Jonathan Da Silveira Fernandes Reis in the 86th minute (3-0).