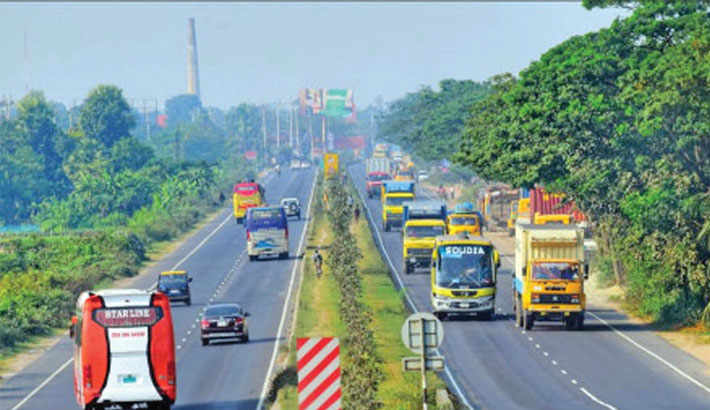 The Cabinet Committee on Government Purchase (CCGP) on Wednesday gave nod to seven procurement proposals, including two for reinforcing parts of the Dhaka-Chattogram highway.

In addition, the Cabinet Committee on Economic Affairs gave approval in principle to a proposal for amending the Gold Policy 2018 to allow refining of imported non-refined gold in the country.

Finance Minister AHM Mustafa Kamal informed journalists about the outcome of the meetings at a virtual news briefing after he presided over the meetings.

Based on a procurement proposal of Roads and Highways Department, Taher Brothers Ltd has been awarded for performance-based operation and strengthening of the Chattogram part of Daudkandi-Chattogram part of the four-lane highway. The total cost of the package is Tk 2.90 billion, Joining the briefing virtually, Cabinet Division Additional Secretary Dr Abu Saleh Mostafa Kamal informed.

The same job in Cumilla part of Daudkandi- Chattogram portion of the highway has been awarded to joint venture of Abdul Monem Ltd and Spectra Engineers Ltd at a cost of around Tk 5.57 billion.

The meeting gave nod to another proposal from the Road Transport and Highways Division under which the joint venture of MM Builders and Engineers Ltd, M/S Janmabhumi Nirman, and Ohiduzzaman Chowdhury (MNO) will implement a project titled construction of Shalla-Jalshukha portion of Namganj-Madanpur-Dirai-Shalla-Jalshukha-Ajmiriganj-Habiganj Highway at a cost of Tk 1.51 billion.

Besides, the day’s CCGP meeting approved yet another proposal from the Road Transport and Highways Division under which the variation proposal of additional around Tk 188.8 million was approved against the joint venture consultants of Oriental Consultants Global Co Ltd. Japan, Oriental Consultants Co Ltd. Japan, PADECO Co Ltd. Japan in association with SMEC, JBSI, ACE, DDC and BCL under the project for cross-border road network improvement. See In another proposal from the Power Division, Bangladesh Rural Electrification Board (BREB) will procure some 23,650 SPC Poles from Bangladesh Machine Tools Factory Ltd (BMTF) at around Tk 323.8 million under the project for expansion of transmission network (Rajshahi, Rangpur, Khulna and Barishal Divisions), first revised, for ensuring cent per cent rural electrification.

Under the first of two separate proposals from the Housing and Public Works Ministry, the joint venture of The Civil Engineers Ltd, Orbital Bangladesh will construct a 20-storey residential building for Dhaka Metropolitan Police in the city’s Demra area at a cost of Tk 803.5 million.

Besides, the meeting approved a variation proposal of additional around Tk 130.4 million against IMC Worldwide, the UK for the consultancy services under the project for ensuring improved livelihood system for low-income people in urban areas (first revised).

About amendment to Gold Policy 2018, Kamal said in many countries of the world, unrefined gold is imported and refined. “It would be a good thing for the country.”

In reply to a question on SANEM’s estimate of 42 per cent poverty in the country after corona, the finance minister said: “It doesn’t reflect the real position of the country and it is distorted.”

He also questioned the sampling of the study and claimed that no one in the country is now starving and the job losers have been reinstated to their jobs.

He also mentioned that the country is going to graduate from the Least developed country (LDC) bracket next month.