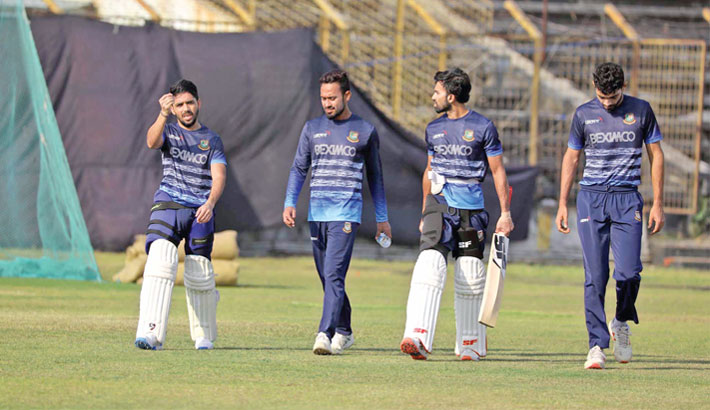 (From left to right) Bangladesh cricketers Mominul Haque, Mohammad Mithun, Shadman Islam and Saif Hassan walk during a training session at the Zahur Ahmed Chowdhury Cricket Stadium on Tuesday, ahead of their first Test against West Indies in Chattogram which is scheduled to start on February 3. — BCB PHOTO

Bangladesh are gearing up for red-ball cricket after taking confidence from their comprehensive 3-0 one-day international series win over West Indies.

Tigers will be eyeing to dominate in the same manner like the way they did against the visiting side in the 50-over format where they humiliated them in all three ODIs.

Tamim finished his first ODI series as captain with scores of 44, 50 and 64 that made him the highest scorer in the series.

Though the innings came against relatively weak opposition, it surely played a major role behind their success considering it laid the platform to allow the middle-order batsmen to play their shots.

The return of Shakib Al Hasan in international cricket could not come in a better way as he did against the Caribbean side after his form in the domestic competition (Bangabandhu T20 Cup) raised doubts over his capability.

Shakib, who returned to international cricket after a gap of one year following his ban by International Cricket Council for failing to report corrupt approaches, seemed to grow stronger with each passing day.

The 33-year old seemed to have added more variations in his bowling while his batting looked to be more consistent as he managed to spend more time in the middle.

Debutant young pace bowler Hasan Mahmud showed promise with his pace and accuracy and the team management can surely take confidence from it considering he can swing the ball in both ways.

Mehidy Hasan ODI’s career seemed to be hanging in balance before the start of the series considering his recent form and the arrival of Mahedi Hasan but he managed it splendidly to erase all doubts at least for the time being.

The most satisfying part the hosts can surely be happy with the return of Mustafizur Rahman as he managed to prove his fitness and also displayed bringing the ball into the batsman which was missing in last few months.

Mohammad Saifuddin also proved his fitness during the last game and Mushfiqur Rahim and Mahmudullah’s making runs gave a clear indication that the 10-month gap hardly mattered for the experienced duo.

However, Tigers are now shifting their focus on longer-format and the only worrying sign is the injury of Shakib, who injured his groin in the last game and now spending time under supervision.

Rookie batsman Yasir Ali Chowdhury said on Tuesday that he is excited to see the way seniors maintain them as they are expected to play key roles in the Test series also.

“We all know how Mushfiqur bhai maintains but the way Tamim bhai and Shakib bhai maintain them is quite amazing. The hard work they put after coming this far is something that we look forward to,” said Yasir.

The seniors need to deliver again while the juniors need to compliment if Bangladesh wants to dominate in the Test series, scheduled to begin in Chattogram on February 3.