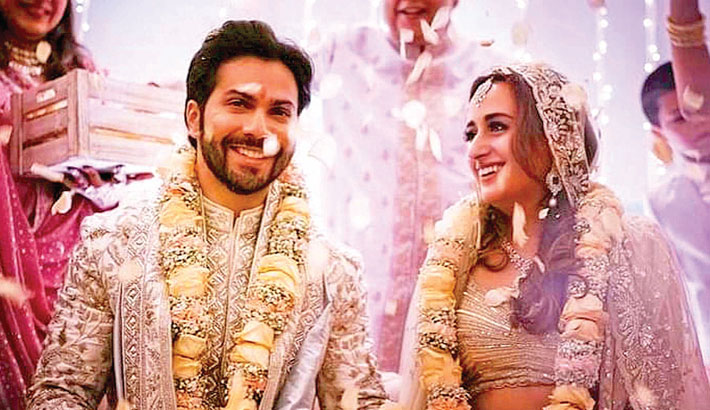 Bollywood actor Varun Dhawan and fashion designer Natasha Dalal tied the knot on Sunday at The Mansion House resort in Alibaug, India. Varun took to Instagram to share the news about his marriage. Along with photos from the wedding, the actor wrote, “Life long love just became official,” report agencies.

The traditional Hindu wedding saw only family members and close friends in attendance.

The couple made their first appearance as a married couple amid flashing lights of the paparazzi. As usual, they were showered with love and wishes from the movie industry, with the celebs pouring their blessings to the newly married couple. First among those was Varun’s first director, Karan Johar who launched him in the industry in 2012 with Student of the Year.

Taking to Instagram, the director-producer shared the pictures from the wedding and wrote a heartfelt note for Varun and Natasha. Karan wrote that he is filled with a multitude of emotions and memories. He described Varun’s journey from being his assistant at My Name is Khan to finally making his debut in 2012 as the lead. The director also mentioned that he has observed Varun’s determined sincerity and how hilarious he can be, even unintentionally.

Karan shared that he felt an immediate protective feeling of love and care for Varun, almost assuming the role of a parent. It was that feeling, Karan mentioned, that came alive in abundance as he saw him walk with his loved one around the holy fire of trust and commitment.

Meanwhile, Varun’s post that announced the wedding has received over 3.8 million likes. The post has also received many comments from his colleagues in the Bollywood. Deepika Padukone congratulated the couple and wrote, “Congratulations you two! Wishing you both a lifetime of love & companionship!”

Varun Dhawan and Natasha Dalal will be hosting their wedding reception for Bollywood celebrities and friends in Mumbai on February 2, 2021.